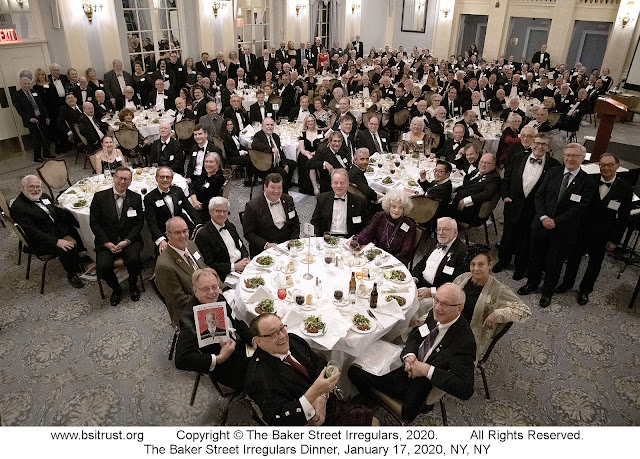 Sherlockians from all trades and regions arrived in New York to commemorate Sherlock Holmes’ 166th birthday with rousing rituals, presentations, songs, tributes, and more than a bit of conviviality.

In the rooftop dining room of the Yale Club, Cathy Miranker was honored by her daughter Emily as The Woman.

Presiding over his final Birthday Dinner as Wiggins, Michael Whelan delivered comprehensive greetings and comments. Robert Katz and John Bergquist announced BSI Press Editors awards (or “Eddies”) to Harrison “Terry” Hunt and Linda Hunt for “Aboriginals”; Candace J. Lewis and Ira B. Matetsky for Upon the Turf; to Marino Alvarez and Tim Greer for Education Never Ends; and to Constantine Rossakis and Dan Stashower for The Worst Man in London.

Candace Lewis delivered an erudite presentation on artist Horace Vernet in the year 1820 (building upon Holmes’ reference in “The Adventure of the Greek Interpreter”). Rebecca Romney offered a wide-ranging examination of the concept of 20/20 vision while noting the 133rd anniversary of the publication of Beeton’s Christmas Annual. Michael Berdan surveyed the impact of the Prohibition ban, whose centennial (16 January 1920) was imminent.

Marsha Pollak, taking over from Francine Kitts, led the assembled to “Stand with me here upon the terrace” to honor members who had passed during the previous year.

Michael Whelan announced his final round of investitures as Wiggins to nine new Irregulars. Andy Fusco received the Two-Shilling Award. Whelan than concluded the evening by handing over the gavel—in all senses of the word—to Michael Kean. Kean, in turn, then bestowed upon his predecessor the title of “Wiggins Emeritus” and led the guests in a heartfelt chorus of “For He’s a Jolly Good Fellow” to mark Whelan’s accomplishments in his 23-year tenure as Wiggins.

Dean Clark led the traditional recitation of Vincent Starrett’s “221B.”

As the guests at Saturday’s Cocktail Reception at the Yale Club could concur, only Judge Albert Rosenblatt and Betsy Rosenblatt could do justice to the past year and the events of the Birthday Week in their famed (and anticipated year-round) poetic summary.

Key to People in the 2020 BSI Dinner photo (not available at this time, but see the 2020 Table Seat Assignments PDF).

Frank Cho as The Duke of Balmoral

Freda Howlett as The British Government

Jim Webb as The Curious Incident of Sherlock Holmes in Japan

Samuel Feinberg (The Prince of Colonna, 1977)

A recording of portions of the 2020 BSI Dinner will be available in the BSI Archive.