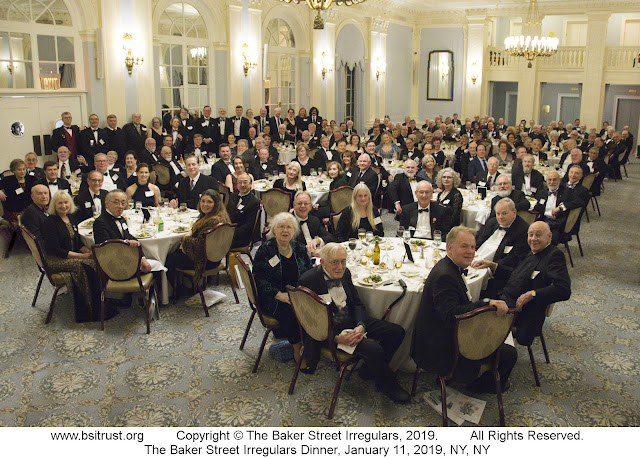 The pre-Dinner proceedings saw not one but two honors tendered. Nelda Richards was honored as The Woman. Then, Peter Blau was surprised by a Festschrift in honor of the 60th anniversary of his investiture.

Katz and John Bergquist presented “Eddies” to a host of talented editors who produced BSI Press titles: Will Walsh and Donny Zaldin for Canon Law; Glen Miranker for Deadly Harpoon, and Les Klinger for Peter E. Blau: A Festschrift.

Francine Kitts led the assembled to “"Stand with me here upon the terrace” to honor members who had passed during the previous year.

Nine Irregulars received their Shilling. Before the evening concluded with the resonant spectacle of Ray Betzner reading from a typescript owned by Vincent Starrett of Starrett’s “221B,” Michael Whelan announced a forthcoming leadership transition. In 2020, Michael Kean will succeed him as Wiggins. For the balance of 2019, Kean will assume the role of Commissionaire.

During the next day’s Cocktail Reception at the Yale Club, the renowned legal and lyrical pair, Judge Albert Rosenblatt and Betsy Rosenblatt, delivered their epic summary—in rhyme—of the preceding year.

Key to People in the 2019 BSI Dinner photo (not available at this time, but see the 2019 Table Seat Assignments PDF).

John Knud-Hansen as This Lascar Scoundrel

Ira B. Matetsky as The Final Problem

The Two-Shilling Award was not given in 2019.

A recording of portions of the 2019 BSI Dinner will be available in the BSI Archive.