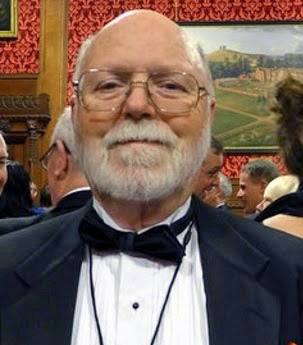 Russell Merritt (The Trepoff Murder, 1960) says he has a single claim to fame:  he first read  A Study in Scarlet in an actual copy of Beeton's Christmas Annual 1887. He gave the 2015 keynote address at the Sherlock Holmes Society of London Meeting at the House of Commons, and was instrumental in the restoration of the long-lost William Gillette film Sherlock Holmes. He has written and spoken about Holmes in the movies in the the 2014 BSJ Christmas Annual, the 2013 BSI Dinner, and the 2012 BSI UCLA conference. Merritt has also contributed to the BSJ, the SHJ, and a chapter to the BSI Manuscript series book Out of the Abyss. He has been going to BSI Dinners since 1958 and has wonderful stories to tell about the early days of the BSI.

Merritt has also taught for many years as a Visiting and Adjunct Professor in the Film Studies and Media Department at the University of California, Berkeley. He has written two books with J. B. Kaufman on Walt Disney's early films and has authored numerous articles on D. W. Griffith, Sergei Eisenstein, Disney, colour theory, animation, and early film.

The 1960 BSI Dinner
Russell Merritt received his Investiture at this BSI Dinner.

Out of the Abyss - "The Empty House" (at the BSI website)
Merritt writes on "Colonel Moran and Celluloid Air-Guns"
BSJ 2016 Christmas Annual
Merritt edited the issue about Gillette’s Sherlock Holmes movie
The 1932 Clive Brook Sherlock Holmes Feature — Restored at Last
Merritt discusses the restored film (at I Hear of Sherlock)
Holmes and the Snake Skin Suits: Fighting for Survival on '50s Television
Merritt writes about Holmes on TV in the 1950s (at Best of Sherlock)