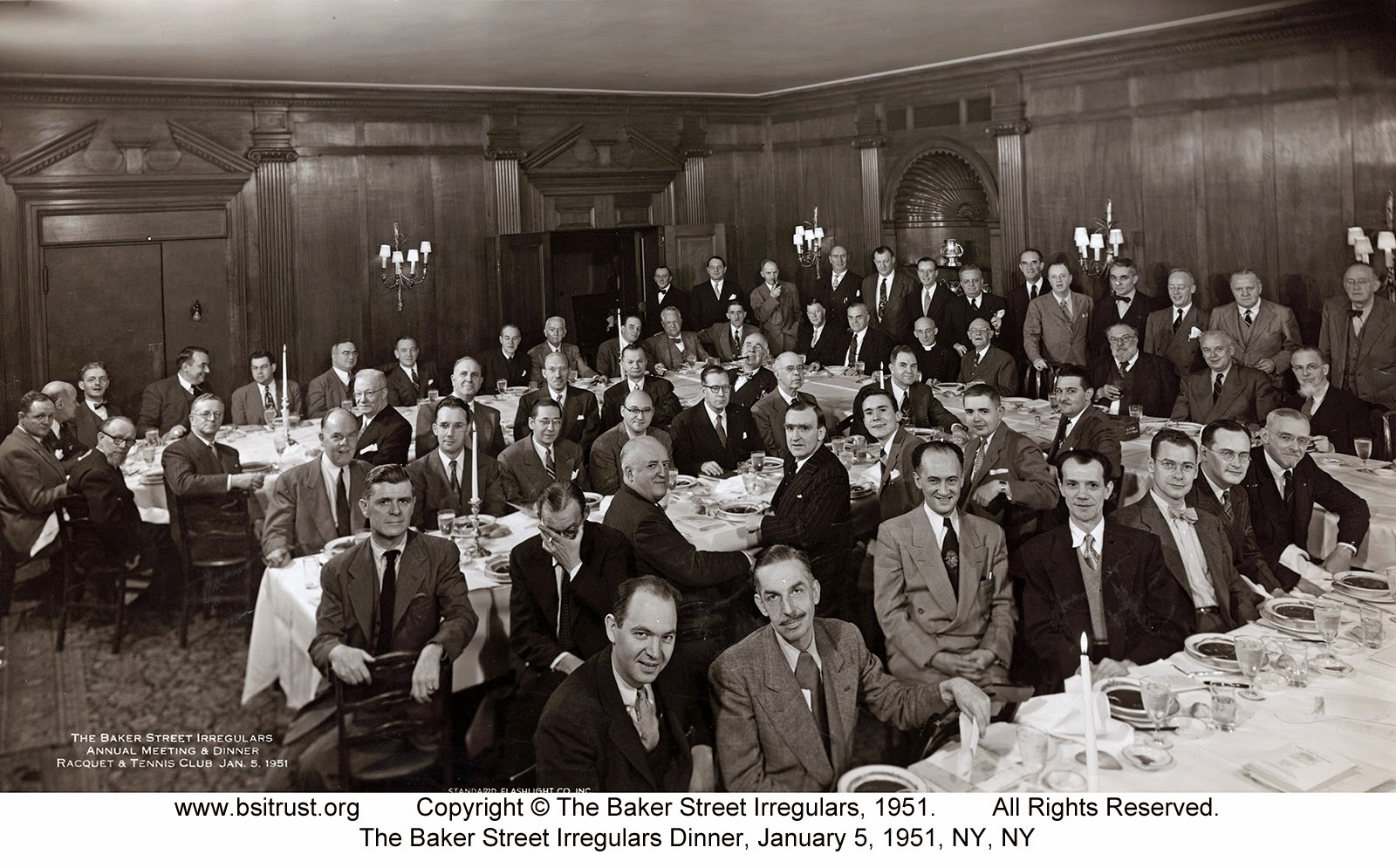 Festivities on the 97th anniversary of the Master’s birth commenced at 6:45pm with dispatches from scion societies in Boston, Chicago, Cleveland, and Denmark, as well as greetings from President Harry S. Truman.

Paul Gore-Booth reported on the favorable prospects for the mounting of a Sherlock Holmes exhibition by the St. Marylebone Borough Council during the forthcoming Festival of Britain. This development had already received coverage in The London Times. James Montgomery presented the attendees with a medley of songs, concluding with his leading the assemblage singing “We Never Mention Aunt Clara.”

The first annual Designation for Scientific Merit was awarded to the Six Napoleons of Baltimore for “assiduous and scholarly pursuit of their endeavors.” This distinction was marked by the gift of a plaster bust of the titular ruler to Lloyd H. Denton, “past master” of the Baltimore group. Of especial note is the presentation by Roger G. Harris of the Amateur Mendicant Society of Detroit regarding the erection of a plaque in the Criterion Bar in London to commemorate John Watson and Stamford’s initial meeting, “without which all would have been naught.” Some funds had already been collected towards this end. However, a dispute arose over whether the plaque should be placed in that suggested location, at 111 Baker Street, or in the laboratory of St. Bartholomew’s Hospital. Edgar W. Smith, Buttons-cum-Commissionaire, was charged to confer with the Detroit Society and to mediate a final decision.

Investitures:
Carl H. Anderson as The Resident Patient
Rolfe Boswell as The Five Orange Pips
Roger Clapp as Wilson, the Notorious Canary Trainer
Benjamin S. Clark as The Retired Colourman
Basil Davenport as Thor Bridge
Isaac S. George as The Veiled Lodger
Peter Greig as The Three Gables
Herbert T. Hand Jr. as The Missing Three-Quarter*
Page Heldenbrand as Charles Augustus Milverton
Cyril A. Keller as The Colossal Schemes of Baron Maupertuis
George Macy as The Bruce-Partington Plans
Svend Petersen as The Mazarin Stone
David A. Randall as The Golden Pince-Nez*
Herbert W. Starr as The Three Students
Thomas L. Stix as The Darlington Substitution Scandal
Norman W. Ward as The Priory School
Frank Waters as The Yellow Face
Manly Wade Wellman as Wisteria Lodge
* received Investiture at another event during the year
What is an Investiture?

1951 BSI Dinner Minutes (digitized images at Harvard)
Note: the minutes repeat some past investitures from 1944.

Blegen, Theodore C., “The Crowded Box-Room, Sherlock Holmes as Poet” (digitized images at Harvard)
Brochure (which may have been distributed at the 1951 BSI Dinner) announcing a new book.  3 pages.  Sequence 38-40.