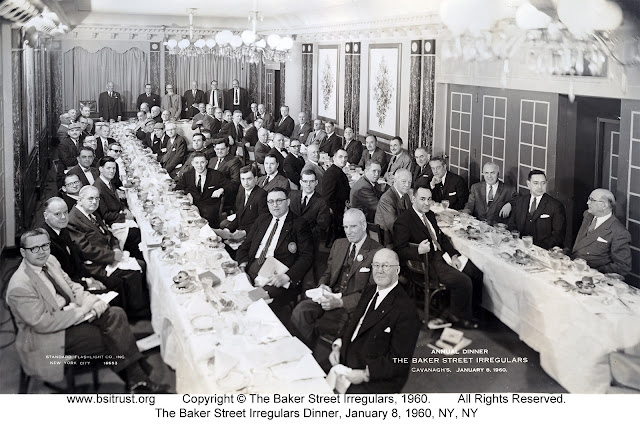 Under the oversight of Rex Stout, who served as Gasogene-cum-Tantalus pro tempore, the 106th anniversary of the Master’s birthday was acknowledged with 69 Irregulars in attendance. The festivities opened with the public reading of the Society’s “Constitution and Buy-laws,” as per tradition, assorted canonical toasts, anthems, and readings. Homages were then paid by Edgar W. Smith (Buttons-cum-Commissionaire), to “that other great and wise man,” Christopher Morley, the founder of the Irregulars, and by Carl Anderson to the memory of Jim Montgomery.

The Buttons read off several announcements, including the forthcoming publication in March 1960 of the second edition of Vincent Starrett’s The Private Life of Sherlock Holmes. Judges Rex Stout, Edgar W. Smith, and Earle Walbridge awarded the 1959 Morley-Montgomery Award to the cunningly-monikered Daniel L. Moriarty for his Baker Street Journal article “The Woman Who Beat Sherlock Holmes.”

Ten members received their Irregular Shilling. The Buttons read dispatches from Scion Societies, from Indianapolis to Denmark to Lowry Air Force Base in Colorado, who were not represented at the meeting by delegations.  Subsequently, representatives from Scions present at the meeting reported on their activities, including The Marquis of Donegall representing the BSI’s sister society in England, the Sherlock Holmes Society of London.

At the stroke of midnight, Samuel F. Howard offered the toast to “To the Best and Wisest Man Whom We Have Ever Known.”

Investitures:
Poul Anderson as The Dreadful Abernetty Business
John Ball Jr. as The Oxford Flier
James Buchholtz as James Stanger of the Herald
Robert B. Frier as Colonel Upwood
Thomas Hart as The Abergavenny Murders
Philip R. Mather as The Case of Fairdale Hobbs
Russell L. Merritt as The Trepoff Murder
Robert S. Morgan as A Simple Case
Daniel L. Moriarty as The Napoleon of Crime
Léo Sauvage as Victor Savage
What is an Investiture?

The Woman:
Not identified; possibly none
What is The Woman honour?

"Stand with me here upon the terrace..."
(as named at this Dinner, not their year of passing)
None listed in the 1960 Minutes or BSJ report.
What is the origin of “standing on the terrace?”

Supplement to the 1960 Membership Roster (digitized image at Harvard)