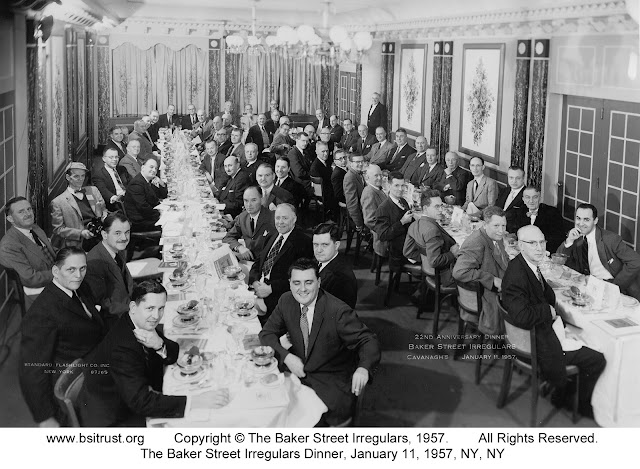 Buttons-cum-Commissionaire Edgar W. Smith, who also served as pro-tempore Gasogene-cum-Tantalus in Christopher Morley’s absence, called the celebrations of the Master’s 103rd anniversary to order. The evening opened with the reading of the Society’s “Constitution and Buy-laws” and included canonical toasts, an assortment of readings from the Master’s oeuvre, and standing upon the Terrace in memory of Irregular Fletcher Pratt. Smith, in his capacity as Buttons, read aloud several greetings and dispatches from around the Sherlockian world, including a message “from a former Senator from a Western State by the name of Richard Nixon.”

Six members received their Irregular Shilling.  Russell McLauchlin delivered “a profound exegesis of The Sign of Four.” Challenges and Disputation in the Canon punctuated much of the evening’s proceedings.

Scion Society reports were proffered: “[m]uch revelation and ground for disputation resulted from the responses forthcoming.” At 11:45, Howard Haycraft proposed the toast to “To the Best and Wisest Man Whom We Have Ever Known.”

Investitures:
Lew D. Feldman as The Hammerford Will Case
Irving M. Fenton as The Singular Tragedy of the Atkinson Brothers
Thomas M. McDade as The Dancing Men
E. W. McDiarmid as The Bruce-Partington Plans
Chris Steinbrunner as The Tankerville Club Scandal
Ernest Bloomfield Zeisler as The Golden Pince-Nez
What is an Investiture?

The Woman:
Sylvia Porter
What is The Woman honour?

"Stand with me here upon the terrace..."
(as named at this Dinner, not their year of passing)
Fletcher Pratt (“The Dancing Men”)
What is the origin of “standing on the terrace?”

Article/partial key to 1957 BSI Dinner photo (PDF) in The Woods-Runner
This literary magazine, published by Lake Superior State College in Michigan, was started by BSI member W.T. (Bill) Rabe (who taught at the school) and some colleagues.  The article reproduced the dinner photo and identified some of the people in it.