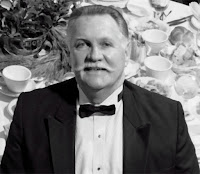 Robert E. Thomalen (The Three Garridebs, 1983) came to Sherlock Holmes through the Rathbone movies, obtained a copy of the Doubleday edition, and read the stories straight through. He attended his first scion meeting, The Three Garridebs of Westchester County, during a blizzard in February of 1978 and was delighted to find that weather is no obstacle for Sherlockians and that all of the members were in attendance.   In 1982, Bob and William P. Schweickert (Cox and Co., 1979, and author of the Sherlockian poem A Long Evening with Holmes) took the helm and together led The Three Garridebs for approximately twelve years. In the course of this partnership, Bill gave Bob the handwritten manuscript for A Long Evening with Holmes, which Bob recently donated to the BSI Trust.

In 1983 Bob and Chris Steinbrunner (The Tankerville Club Scandal, 1957) resurrected The Priory Scholars of New York.   When Tom Stix, Jr. assumed the position of the BSI's "Wiggins," Bob was his advisor and sounding board, with the title of "Cartwright." Bob managed and emceed the BSI weekend Cocktail Reception for many years and is the founder of the annual weekend Sherlockian event known as Autumn in Baker Street, a weekend-long gathering, first held at Bear Mountain, NY in 1982 and which subsequently ran for twenty years.  Bob was surprised when 56 people attended the first one; each year, attendance increased.

Bob was the proud husband of Theresa Thomalen (who received the "The Woman" honour in 1994).

He received the Two-Shilling award in 1988.  His reminiscences are filled with behind-the-scenes candor and his characteristic good humor.  Bob passed away in December 2020.

Manuscript excerpt from A Long Evening with Holmes by William P. Schweickert

The 1983 BSI Dinner
Robert Thomalen received his Investiture at this BSI Dinner.