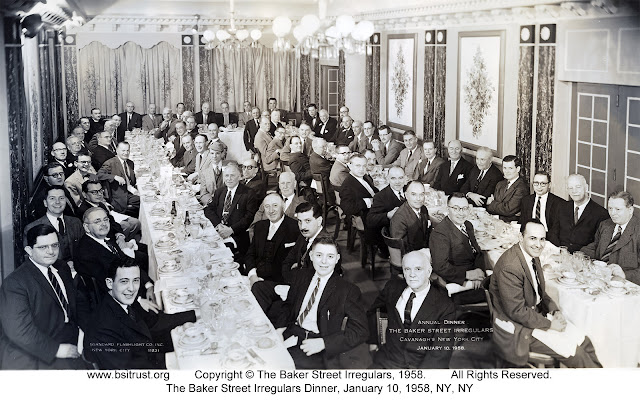 Sixty nine Irregulars and guests gathered to commemorate the Master’s 104th birthday. Buttons-cum-Commissionaire Edgar W. Smith also served as Gasogene-cum-Tantalus. Proceedings commenced with the public reading of the Society’s “Constitution and Buy-laws,” canonical toasts, an assortment of readings from the Master’s oeuvre, and standing upon the Terrace in memory of Irregular Dr. Roland Hammond.

The evening featured a tribute to Christopher Morley, who had broken from the ranks in March 1957:  “that great spirit who was the Founder of the Irregulars, and who had been its inspiration for so long—its Gasogene-cum-Tantalus in perpetuity.” Many distinguished colleagues and friends, including Peter Greig, William Baring-Gould, and his nephew Rev. Anthony Morley among them, spoke meaningfully about Christopher Morley’s enduring wisdom, deep friendship, and lasting influence. His brother, Dr. Felix Morley, spoke both about Christopher and of the Irregulars “who were a part of Chris himself, as he was of them.”

Five members received their Irregular Shilling.  Lew D. Feldman then announced the founding of a Morley-Montgomery Award: $100.00 to be awarded annually to the contributor of the most outstanding article “in the judgment of the Editor” to the Baker Street Journal. [Please see the Explanation of BSI Honours & Terms for background on this award.]

A veritable Baedeker of Scion Society accounts from around the world were read to the assemblage. Long past the formally appointed hour of closing, at 12:20am the toast was offered to “To the Best and Wisest Man Whom We Have Ever Known.”

Investitures:
Arthur K. Akers as The Bishopgate Jewel Case
Charles Fisher as The Matilda Briggs
E. T. Guymon Jr. as The Veiled Lodger*
Everett C. Hoffman as Merridew of Abominable Memory
Samuel F. Howard as The Dutch Steamship Friesland
Robert E. Matthews Jr. as The Coptic Patriarchs
Lenore Glen Offord as The Old Russian Woman*
Stuart Palmer as The Remarkable Worm*
David A. Weiss as Crosby, the Banker*
George E. Wells as The Paradol Chamber*
* received Investiture at another event during the year
What is an Investiture?

"Stand with me here upon the terrace..."
(as named at this Dinner, not their year of passing)
Dr. Roland Hammond (“Silver Blaze”)
Christopher Morley (“The Sign of the Four ”)
What is the origin of “standing on the terrace?”

Merritt, Russell, 1958 BSI Dinner Talk (digitized image at Harvard)
At his first BSI Dinner, a 16 year old Russell Merritt presented a short talk.  He donated the retyped text of that talk to the BSI Trust in 2007.  Three pages plus the 2007 cover memo to Michael Whelan donating his talk. Sequence 67-70.

First Woman Invested
As listed above, Lenore Glen Offord, a prolific mystery writer, was the first woman to be invested in the BSI (and the last until 1982). She never attended a BSI Dinner.  Read more about Ms. Offord and her Investiture at the Adventuresses of Sherlock Holmes website.