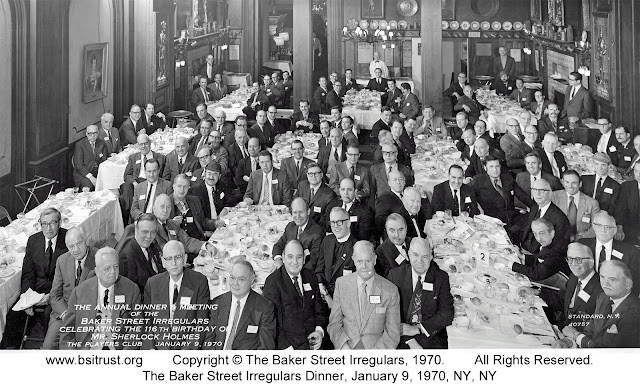 The celebrations of Sherlock Holmes’s 116th birthday were held this year at the Players Club,  “the club of many present-day and old-time Sherlockians—among them Frederic Dorr Steele, Christopher Morley, and Basil Rathbone. The most appropriate and delightful atmosphere contributed much to the great success of the occasion.”

Proper attention was paid to all Irregular rites and rituals. Molly (Mrs. Howard) Haycraft was honored by Tom Stix (Sr.) as The Woman. Five Irregulars were invested. Attendees then “stood on the terrace to recall…our last quiet talks with several faithful Irregulars.” The papers of the evening demonstrated “the usual high calibre” that has come to typify this yearly tradition.

Investitures:
Paul S. Clarkson Jr. as Morse Hudson*
Thomas Frederick Foss as Colonel James Barclay*
Martin J. King as Mr. James M. Dodd
Mo Lebowitz as Arthur H. Staunton, the Forger
Howard Luther as The Duke of Holdernesse**
Walter Pond as Brunton, the Butler, of Hurlstone
Ira Wolff as Douglas Maberley
* received Investiture at another event during the year
** in absentia
What is an Investiture?

The Woman:
Molly (Mrs. Howard) Haycraft
What is The Woman honour?

"Stand with me here upon the terrace..."
(as named at this Dinner, not their year of passing)
Not listed in the 1970 BSJ report.
What is the origin of “standing on the terrace?”

List of 1970 BSI Dinner Attendees (not available at this time, but see Key to the Photo, below)