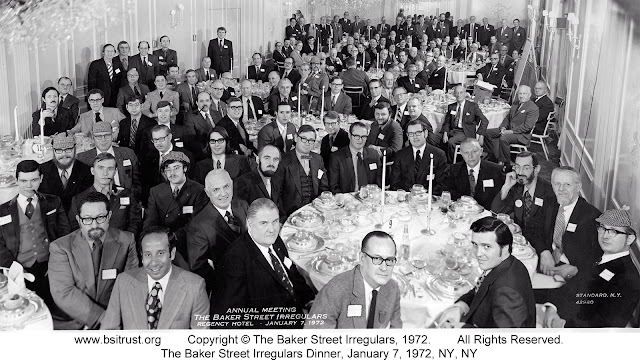 Sherlock Holmes’s 118th birthday was celebrated by “a record attendance of 130” at the Regency Hotel. All Irregular rites were observed. 11 Irregulars were invested at the Dinner. Dorothy (Mrs. Herbert) Brean was honored as The Woman. Papers of “the highest quality” were delivered by esteemed speakers, including Tom McDade, Tom Stix (Sr.), Will Oursler, Bill Jenkins, Herb Brean, John Ball, and John Bennett Shaw.  Thoughtful members, such as Fred Dannay, Peter Blau, and Ira Wolff, contributed “keepsakes” for the enjoyment and edification of all.

Key to People in the 1972 BSI Dinner Photo (digitized image at Harvard)
Three pages. Front, interior, and back. Sequence 39-41

The Woman:
Dorothy (Mrs. Herbert) Brean
What is The Woman honour?

"Stand with me here upon the terrace..."
(as named at this Dinner, not their year of passing)
Not listed in the 1972 BSJ report.
What is the origin of “standing on the terrace?”

List of 1972 BSI Dinner Attendees (not available at this time, but see Key to the Photo, above)