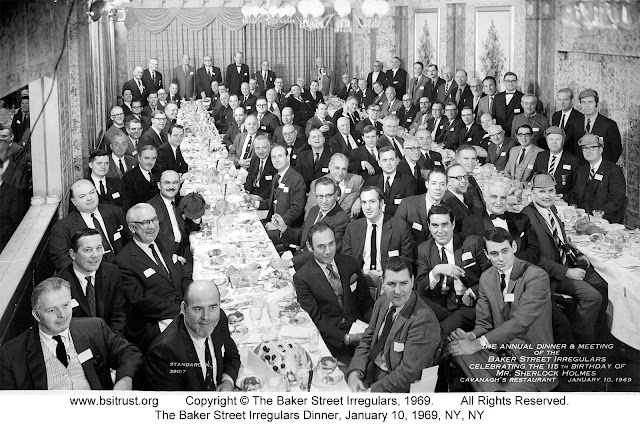 Sherlock Holmes’s 115th birthday was “an even greater success than usual,” so Julian Wolff’s Commissionaire’s Report reads. All Canonical rites, including the Canonical and Irregular toasts, Sherlockian musical performances, and the recitation of the Musgrave Ritual and Sherlock Holmes’s Prayer were diligently performed.  Ceil (Mrs. William S.) Baring-Gould was honored as The Woman.

Tribute was paid to Sherlockians who had passed away over the preceding year. Ten Irregulars were invested. After judges James Nelson, H.W. Starr, and Rex Stout deliberated, Lew Feldman awarded the Morley-Montgomery Award to Poul Anderson (eleven years after Anderson first won in the award’s first year of existence). Feldman then exhibited before the assembled what the Commissionaire fittingly characterized as “the Dead Sea Scroll” of Sherlockian relics: the manuscript notes made by Sir Arthur before A Study in Scarlet was written.

A special award, The Queen Victoria Medal, was given “For Outstanding Contributions to the Quartering of The Union Jack with The Stars and Stripes” to Lord Donegall (in absentia) and Lew D. Feldman.

The evening concluded with reports, speeches (Will Oursler, John Bennett Shaw, Nathan Bengis, and Lyttleton Fox), and performances of the first order, including a demonstration of magicianship by John Mulholland, “the very same exhibition of his art that had baffled Sir Arthur himself.”

Investitures:
Ronald B. De Waal as Lomax, the Sub-Librarian
George Fletcher as The Cardboard Box
Lyttleton Fox as The Gloria Scott
J. Hoxie Haas Jr. as Wisteria Lodge
George John as Sir Jasper Meek
Bryson R. Kalt as Charles Augustus Milverton*
Rodney Mannion as Shoscombe Old Place
David F. Musto as Dr. Anstruther
John Nieminski as Abe Slaney**
Donald A. Redmond as Good Old Index*
James B. Saunders as The Beryl Coronet
Philip Sherman as The Six Napoleons
* received Investiture at another event during the year
** in absentia
What is an Investiture?

The Woman:
Ceil (Mrs. William S.) Baring-Gould
What is The Woman honour?

"Stand with me here upon the terrace..."
(as named at this Dinner, not their year of passing)
Not listed in the 1969 BSJ report.
What is the origin of “standing on the terrace?”