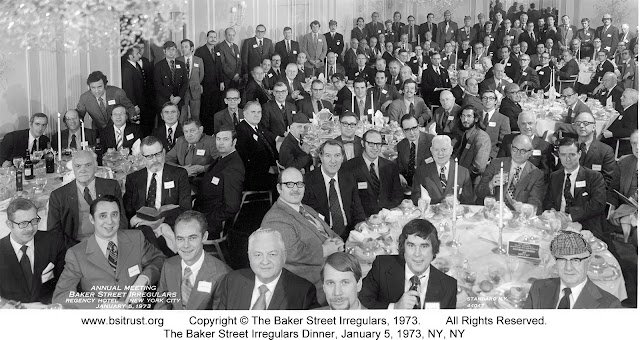 The Baker Street Irregulars celebrated the 119th birthday of Sherlock Holmes at The Regency Hotel.  The Commissionaire, Julian Wolff, intended to present the Sherlock Holmes silver medal to Mr. Rafael Sevilla-Sacasa (Director of the Philatelic Bureau of the Republic of Nicaragua) for his services in keeping the memory of the Master green by the issuance of the first official Sherlock Holmes stamp.  Unfortunately, Mr. Sevilla-Sacasa was unable to be present due to a severe earthquake in his country. The medal was awarded to him in absentia.  In his place, Mr. Jeff Oakden, of the Crown Agents, delivered a short address.  All of the BSI’s traditions were observed, beginning with the first Conanical toast to The Woman, Ines (Mrs. William S.) Hall, whose late husband was one of the founders of the BSI. Newcomers were introduced. Jim Montgomery’s songs were played, and papers of unusually high calibre were delivered by Will Oursler, Bruce Kennedy, John Bennett Shaw, and John Linsenmeyer.  Six Investitures were awarded at the Dinner.  The BSI, through a small committee headed by James Nelson, presented a special golden sovereign to the Commissionaire, who wrote that he intended to wear it on his watch-chain in memory of the occasion.

Key to People in the 1973 BSI Dinner Photo (digitized image at Harvard)
Three pages. Front, interior, and back. Sequence 44-46

The Woman:
Ines (Mrs. William S.) Hall
What is The Woman honour?

"Stand with me here upon the terrace..."
(as named at this Dinner, not their year of passing)
Rufus Tucker (The Greek Interpreter, 1944)
Reginald Owen (the actor who played both Holmes and Watson)
Harry Truman (former President and Honorary BSI)
What is the origin of “standing on the terrace?”

List of 1973 BSI Dinner Attendees (not available at this time, but see Key to the Photo, above)

Julian Wolff at a BSI Dinner

In the following 7-minute vignette from the 1973 BSI Dinner, Commissionaire Julian Wolff is given a gold sovereign by James Nelson.

A recording of the entire 1973 BSI Dinner is available at Harvard as part of the BSI Archive.