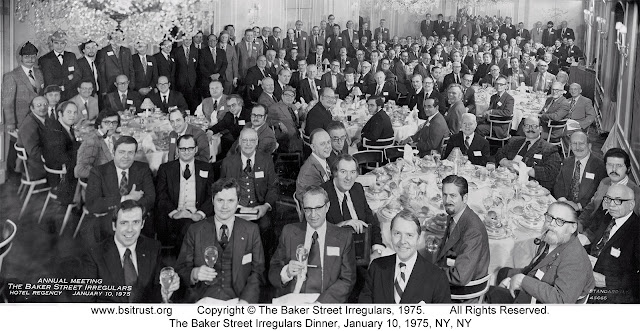 The cocktail hour that introduced Sherlock Holmes’s 121st birthday festivities featured as esteemed guests actors John Wood and Mel Martin, who portrayed, respectively, Sherlock Holmes and Alice Faulkner in William Gillette’s play, Sherlock Holmes. Princess Nina Mdivani Harwood (the widow of Denis Conan Doyle and daughter-in-law of Sir Arthur Conan Doyle) was honored as The Woman. The Dinner also marked Fred Dannay’s (half of Ellery Queen) return.  There were 147 attendees. Rev. Leslie Marshall’s delivery of Sherlock Holmes’s Prayer was especially notable during the proceedings. There was Canonical music, followed by Standing on the Terrace for those who had dropped from the ranks, the introductions of a large number of first-timers, and the awarding of Honours to those who had served the cause well. After several scholarly papers, brief reports from the Scion Societies were given.  Julian Wolff called the 1975 meeting “probably the best ever.”

Key to People in the 1975 BSI Dinner Photo (digitized image at Harvard)
Three pages. Front, interior, and back. Sequence 54-56

Investitures:
Glenn Laxton as Mr. James M. Dodd
William McCullam as The Reigate Squires**
Jan C. Prager as Mr. Fairdale Hobbs, changed to Lowenstein of Prague
Nicholas Utechin as The Ancient British Barrow**
Lynn E. Walker as The Long Island Cave Mystery
* received Investiture at another event during the year
** in absentia
What is an Investiture?

The Woman:
Princess Nina (Conan Doyle Harwood) Mdivani
What is The Woman honour?

"Stand with me here upon the terrace..."
(as named at this Dinner, not their year of passing)
Not listed in the 1975 BSJ report.
What is the origin of “standing on the terrace?”

List of 1975 BSI Dinner Attendees (not available at this time, but see Key to the Photo, above)