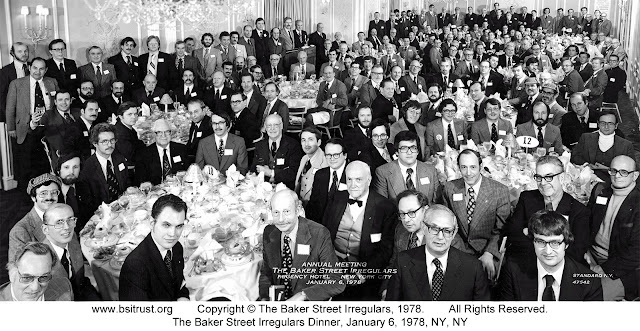 Celebrations of Sherlock Holmes’s 124th birthday were deemed “unusually successful” due to the august presence of honored guests Lady Gore-Booth at the pre-prandial cocktail party and of Lord Gore-Booth, President of The Sherlock Holmes Society of London, at the dinner. Diane Nolan was fêted as The Woman. Six Irregular shillings were bestowed.

Missives from scions worldwide, including a message from Colin Prestige, Chairman of the Sherlock Holmes Society of London, were delivered with gusto. Attendees were treated to learned discourses from Lord Gore-Booth, John Bennett Shaw, Dr. David Musto, Dr. Charles Goodman, and Will Oursler. According to Julian Wolff’s notes, the latter was in fine form: “Without detracting from the others, it must be said that Will Oursler was in rare form; in fact, many in the gathering claimed that they actually under- stood what he was talking about.”

Investitures:
Forrest Athey as The Hammerford Will Case
Ted Bergman as The Honourable Philip Green**
Saul Cohen as John Ferrier
Thomas Dandrew II as The Naval Treaty
Cameron Hollyer as The Three Students
Wayne B. Swift as The Giant Rat of Sumatra
* received Investiture at another event during the year
** in absentia
What is an Investiture?

The Woman:
Diane (Mrs. Norman S.) Nolan
What is The Woman honour?

"Stand with me here upon the terrace..."
(as named at this Dinner, not their year of passing)
Not listed in the 1978 BSJ report.
What is the origin of “standing on the terrace?”

List of 1978 BSI Dinner Attendees (not available at this time)