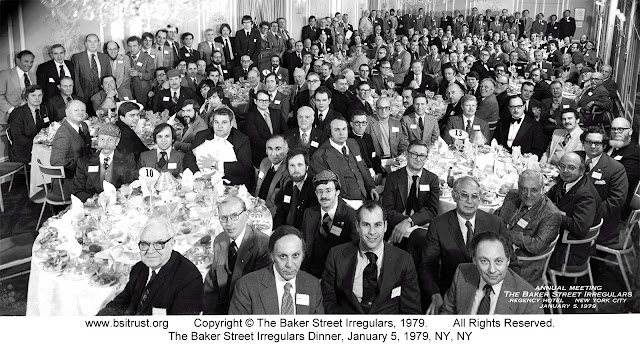 The 1979 Dinner marking Sherlock Holmes’s 125th birthday was “a great success and a new attendance record was made.” Julia Rosenblatt was honored as The Woman. Twelve Irregular shillings were bestowed.

Short talks were proffered by Mark McPherson, Will Oursler, Ed Clark, Al Rosenblatt, and Isaac Asimov. The Baker Street Journal notes that “the contributions of Clark and Asimov were especially brilliant.” The Irregular reception at The Grolier Club, which took place the following day, January 6, was also termed “an unusually enjoyable (and crowded) affair, attended by 200 Irregulars and their ladies.”

Investitures:
James Brewer as Josiah Brown
Frank A. Hoffmann as Altamont
Richard L. Katz as Jean Baptiste Greuze
Michael H. Kean as General Charles Gordon
Ely M. Liebow as Inspector Gregory
Mark McPherson as Cecil Barker
Jeffrey Montgomery as Inspector Montgomery
Harold E. Niver as The Man on the Tor
William P. Schweickert as Cox and Co.
Blaine Simons as The Strange Old Book Collector*
George Sturm as Neil Gibson
Benton Wood as A Scandal in Bohemia**
* received Investiture at another event during the year
** in absentia
What is an Investiture?

The Woman:
Julia (Mrs. Albert M.) Rosenblatt
What is The Woman honour?

"Stand with me here upon the terrace..."
(as named at this Dinner, not their year of passing)
Not listed in the 1979 BSJ report.
What is the origin of “standing on the terrace?”

List of 1979 BSI Dinner Attendees (not available at this time)

Julian Wolff at a BSI Dinner

In the following 4-minute vignette from the 1979 BSI Dinner, Commissionaire Julian Wolff announces the BSI Investitures for that year.

A recording of the entire 1979 BSI Dinner is available at Harvard as part of the BSI Archive.