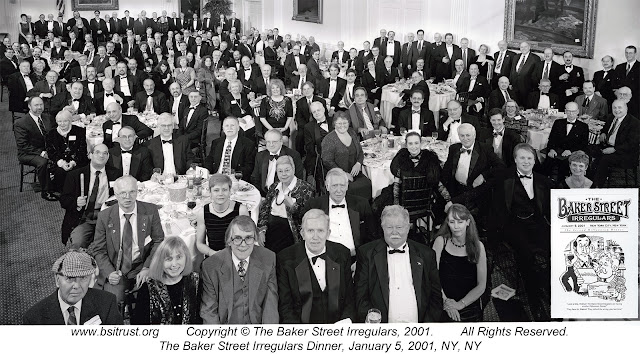 “Were we celebrating the arrival of 1901 or 2001?” So opens the Baker Street Journal’s recap of the festivities commemorating Sherlock Holmes’ 147th Birthday, where “the last gasps of the Victorian and Clintonian eras merged.”

Steven Doyle read our Constitution and Buy-Laws.  The evening’s toasts included a homage to Old Irregular Elmer Davis, ably proffered by Jon Lellenberg. This accolade included a radio broadcast by Davis describing Hitler’s invasion of Poland.  Jerry Margolin toasted Mrs. Hudson, while Don Curtis toasted Mycroft Holmes. Peter Crupe toasted Watson's Second Wife's willingness to allow her husband to continue his adventures with Holmes. George McCormick spoke of other seconds in the Canon. (George was recognized for attending his 43rd consecutive annual dinner.)  William Hyder offered a valuable admonition to those who dare to claim that Holmes was not real.  Andrew Fusco reminded us of the qualities that made Irregulars like Nathan Bengis so memorable.

Tributes continued throughout the evening, with Andrew Joffe, Mary Ellen Rich, and Paul Singleton, ably accompanied by Henry Boote, praising the Three Irregulars (Eddy the Button, Julie the Wolf, and Tommy the Stick) in music hall-like songs.  The presentations ended with Shirley Purvis defending the Hound of the Baskervilles as an innocent dog.  Irving Kamil performed the annual "On the Terrace" ceremony (recognizing those who passed beyond the Reichenbach the previous year) which he had been doing since 1997 and would continue to do through 2009.

Sharon (Mrs. Donald E.) Novorsky was heralded as The Woman. Seven Irregulars received their Shillings. The Two-Shilling Award was presented to Donald K. Pollock for his tireless efforts as former editor of the esteemed BSJ.

At the next day’s Sherlockian Cocktail Reception, Judge Albert Rosenblatt, for the first time, enlisted the collaboration of his daughter Betsy Rosenblatt, and, together, they performed their remarkable summation of the previous year and of the Festivities in verse.

Investitures:
Charles Foley as Marlow Bates
Marcus Geisser as Rosenlaui
Julie A. McKuras as The Duchess of Devonshire
W. Scott Monty II as Corporal Henry Wood
Lloyd Rose as George Sand
Andrew L. Solberg as Professor Coram
Daniel Stashower as Thurston
* received Investiture at another event during the year
What is an Investiture?

The Woman:
Sharon Novorsky
What is The Woman honour?

"Stand with me here upon the terrace..."
(as named at this Dinner, not their year of passing)
Alan Addlestone (The Addleton Tragedy, 1985)
Katherine McMahon (Lucy Ferrier, 1991)
William R. Michell (The Rock of Gibraltar, 1985)
E. W. McDiarmid (The Bruce-Partington Plans, 1957)
Cameron Hollyer (The Three Students, 1978)
Don Hardenbrook (Huret, the Boulevard Assassin, 1955)
What is the origin of “standing on the terrace?”

List of 2001 BSI Dinner Attendees (not available at this time)

A recording of portions of the 2001 BSI Dinner is available at Harvard as part of the BSI Archive.