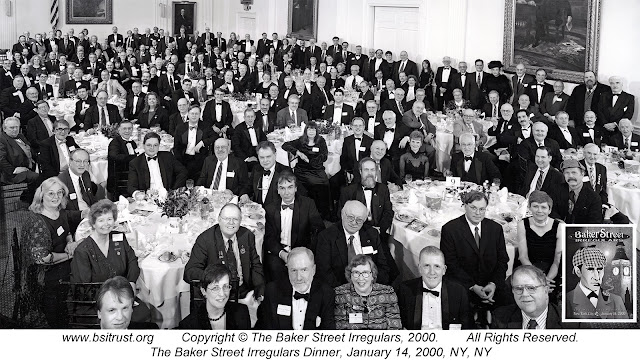 Sherlock Holmes’s 146th Birthday and the BSI’s 66th anniversary were commemorated in “thoroughly enjoyable” fashion. Wiggins (Michael Whelan) noted that, to honor of this BSI milestone, the evening’s menu was the same(!) as at the inaugural 1934 dinner. He then thanked the many on whom he relies, especially Don Pollock for his stewardship of the Baker Street Journal, and announced that Steven Rothman would be succeeding Don as Editor.

Wiggins gave special acknowledgment to the two Sherlock Holmeses in attendance that evening - Douglas Wilmer (the portrayer of Holmes on BBC television in the 1960s) and Roger Llewellyn, who was to impersonate the Master on stage the next evening.  The esteemed attendees also included four people who have been Irregulars for forty years or more—Poul Anderson (40), Peter Blau (41), David Weiss (42), and Art Levine (44). At the dinner were representatives from the United States, Canada, England, Denmark, Sweden, Switzerland, Japan, and Australia.

Wayne Swift read the BSI Constitution and Buy-Laws. An excellent range of toasts followed, including Leslie Klinger’s toast to Holmes’ individuality, his single-mindedness, and drive to do the right thing. Paul Smedegaard’s toast to Mrs. Hudson, Kate Karlson’s toast to Mycroft, Gordon Speck’s toast to Watson’s Second Wife, and Bob Coghill’s toast to the great Sherlockian Tupper Bigelow.  Ralph Hall read the Musgrave Ritual.  “The Master Over Three Centuries” began with Bernard Davies speaking of the 1800s and how the century changed. Julie Rosenblatt described the 20th century as the century of Sherlock Holmes. Poul Anderson spoke of the future, saying that Holmes will endure.

Other presentations were in the form of a medical panel, chaired by Robert Katz, MD, who talked about Professor Moriarty.  Richard Caplan, M.D., stated that “The Adventure of the Creeping Man” boiled down to sex. Marina Stajic, M.D., discussed the death of Enoch Drebber.  Paul Martin, M.D., discussed the aneurysm from which Jefferson Hope suffered.  Then, Evelyn Herzog and Ray Betzner proposed a new Constitution for the BSI.  However, Andrew Fusco replied that the existing Constitution has no provisions for amendment; therefore, a convention of the original drafters would be required to change it. Paul Herbert read the Vincent Starrett poem “221B.”

Eleanor O’Connor was heralded as The Woman and received, in due tribute, a Golden Door inscribed with “221B.” Eight Irregulars received their Shillings. The Two Shilling Award was presented to Scott Bond.

The Woman:
Eleanor O’Connor
What is The Woman honour?

List of 2000 BSI Dinner Attendees (not available at this time)

A recording of portions of the 2000 BSI Dinner is available at Harvard as part of the BSI Archive.