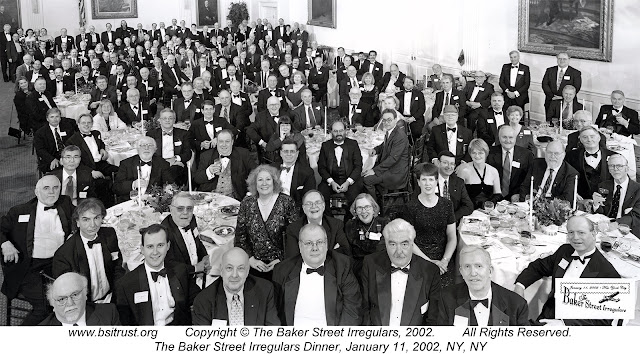 An inescapable guest at the 148th anniversary of the Master’s birth in New York was the somber memory and resonance of the September 11, 2001 attacks. The BSJ’s account movingly notes:

The Baker Street Irregulars reaffirmed the ties of Sherlockians around the globe, a welcome opportunity in the wake of the tragic events of the past few months. At the start of the program, Mike Whelan pointed out a symbol of this shared sense of unity—a small stand adorned with the flags of the nations represented in the room that night.

The dinner’s theme, a celebration of international Sherlockians, could not be more fitting. Such attendees were well-represented in the various rituals and rites, from the rendition of the Buy-Laws by Mia Stampe from Copenhagen, the toast to Dr. Watson's Second Wife by Jean Upton of England, the delivery of the Musgrave Ritual, in Italian(!) by Enrico Solito of Italy, a toast to old Irregular Lord Donegall by Catherine Cooke of England, the toast to Mrs. Hudson by Douglas Elliott of Australia, the toast to Mycroft Holmes by Yuichi Hirayama of Japan, and the toast to Sherlock Holmes by David Stuart Davies of England. Michael Ross reported on the history of Holmesian activity in Germany. Hartley Nathan spoke of the Bootmakers of Toronto. The history of Sherlock Holmes in Japan was given by Masamichi Higurashi. Roger
Johnson spoke of Anthony Howlett, the Festival of Britain, and the advent of the Sherlock Holmes Society of London.

Jon Lellenberg was honored with the “Silver Penguin Award”—an engraved silver-plated penguin shaped cocktail shaker, its origins shrouded, perhaps, in myth—in appreciation of his editorship of the BSI’s History Series.

Joyce (Mrs. James B.) Saunders was heralded as The Woman. A sizable class of ten Irregulars received a Shilling. The Two-Shilling Award was presented to Susan Rice.

The evening ended with Philip Brogdon's moving recitation of Vincent Starrett's "221B."

At the next day’s Sherlockian Cocktail Reception, Donald Yates presented a paper offering a closely reasoned alternative reading of The Hound of the Baskervilles in honor of what has come to be known as the Year of the Hound.  Judge Albert Rosenblatt and his daughter Betsy Rosenblatt, once again performed their remarkable summation of the previous year and of the Festivities in verse.

The Woman:
Joyce Saunders
What is The Woman honour?

"Stand with me here upon the terrace..."
(as named at this Dinner, not their year of passing)
Dee Alexander, the second of Edgar Smith's secretaries at GM, and the first Secretary General of the BSI, Inc.
Poul Anderson (The Dreadful Abernetty Business, 1960)
Wayne B. Swift (The Giant Rat of Sumatra, 1978)
Bill Ward (Major Prendergast, 1984)
What is the origin of “standing on the terrace?”

List of 2002 BSI Dinner Attendees (not available at this time)

A recording of portions of the 2002 BSI Dinner is available at Harvard as part of the BSI Archive.