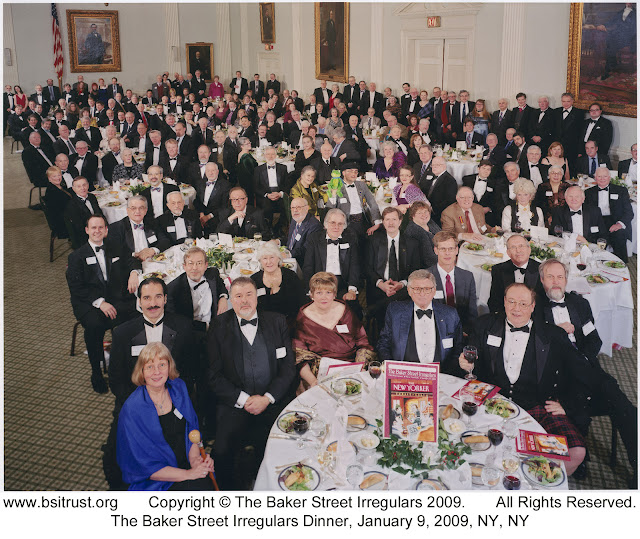 Guy Marriott and Nicholas Utechin had some fun kicking off the presentations with a hilarious debate on the Oxford-Cambridge controversy.  Andrew Solberg repeatedly insisted that he was Professor Coram discussing how the outside (and inside) world viewed the BSI.  David Stuart Davies performed a side-splitting one man radio version of “The Red-Headed League.”  Jens Byskov Jensen and Henry Boote (violin and piano respectively) gave us that "Tra-la-la-lira-lira-lay" piece plus a version of Harvey Officer's Baker Street Suite for Violin and Piano.

Twelve deserving Irregulars received their Shilling.  Daniel Posnansky was honored with The Two-Shilling Award for extraordinary devotion to the cause beyond the call of duty, particularly for his work on the BSI Archives.  Yuichi Hirayama, Doug Elliott, Bill Barnes, John Bergquist, Susan Rice, and Nicholas Utechin received the Editor’s Medal in recognition of their services as editors of books and Christmas Annuals published by the BSI.

Sharon Klinger was toasted as The Woman.  Because weather had prevented the 2008 recipient from being present to receive said honor, Priscilla Juvelis was feted, as well.

The evening ended with a masterly reading of Starrett's "221B" by George McCormack.

Key to People in the 2009 BSI Dinner photo (not available at this time, but see the 2009 Table Seat Assignments PDF)

Investitures:
Bill Barnes as The Gloria Scott
Jeffry A. Bradway as A Case of Identity
S. E. Dahlinger as The Bruce-Partington Plans
Greg Darak as The Engineer's Thumb
Allan Devitt as The Dancing Men
Robert Ellis as The Illustrious Client
Walter W. Jaffee as The Resident Patient
Jens Byskov Jensen as The Blanched Soldier
Sébastien Le Page as The Six Napoleons
Michael Pollak as The Blue Carbuncle
Barbara Rusch as The Mazarin Stone
Joel Schwartz as The Three Students
* received Investiture at another event during the year
What is an Investiture?

The Woman:
Sharon (Mrs. Leslie) Klinger.
What is The Woman honour?

A recording of portions of the 2009 BSI Dinner is available at Harvard as part of the BSI Archive.