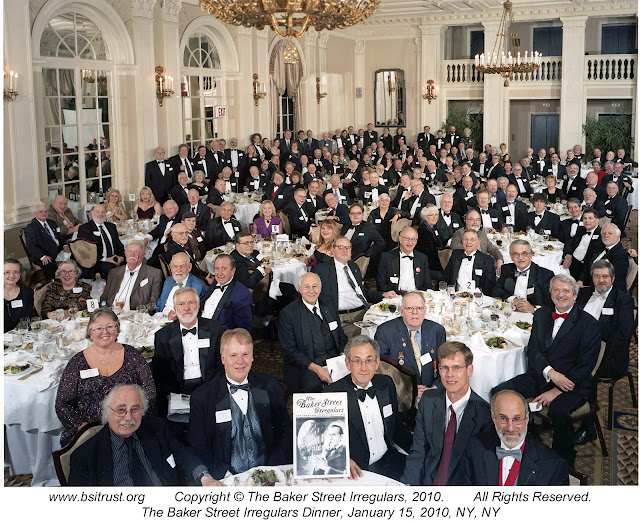 The dinner celebrating Sherlock Holmes’s 156th birthday was held (for the first time) at the Yale Club, with the evening proceeding in (paraphrasing from the Baker Street Journal report) a lofty, plaster-embellished banquet hall, lit by the sort of candelabra under which Henry Baskerville likely found himself.

The program began with Wiggins (Michael Whelan) presenting an engraved crystal vase to Freda Howlett, the 90 year old “Grand Lady of the International Sherlockian World,” recognizing her as co-founder, honorary member, and past president of The Sherlock Holmes Society of London.  Donald Izban read the Constitution and Buy-Laws, reading the first two Articles in Polish.  Allan Devitt toasted Mrs. Hudson. Walter Jaffee toasted Mycroft Holmes.  Gregory Darak had us raise our glasses to Watson's second wife, and Donald Novorsky was to toast Sherlock Holmes but, unfortunately, had a family emergency.   Curtis Armstrong led the responsive reading of the Musgrave Ritual.

Nils Nordberg reported on Holmes’s traveling during “the hiatus,” and proposed that Sherlock Holmes was Norwegian. Hartley Nathan reported on an authentic Penang lawyer that security concerns prevented him from bringing onto the plane in Canada.  Sue Vizoskie discussed what might have happened if Sherlock Holmes had been a woman, and Peter Blau gave a stirring toast to Old Irregular Bill Rabe.  Special guest Ray Jessel, who wrote music and lyrics for the 1965 Broadway musical Baker Street, spoke of the joys and difficulties of composing for Holmes and Watson.  He also performed a few “snippets” from the musical. Leslie Klinger attempted to show a video presentation of a Robert Downey, Jr. interview (in which Downey sent his regards), but was unfortunately thwarted by a Moriarty-masterminded bug in the media’s sound player.  As usual, Henry Boote led the throng in “Aunt Clara.”   Francine Kitts performed a moving “Standing upon the Terrace” ceremony, remembering those whom we have lost.  She graciously took over for Irv Kamil, who had performed this difficult task for many years.

Nine deserving Irregulars received their Shilling.  John Bergquist, Bob Coghill, and Steven T. Doyle were honored with The Two-Shilling Award for extraordinary devotion to the cause beyond the call of duty. Steven Rothman, John Bergquist, Leslie Klinger, Susan Dahlinger, Glen Miranker, and Gianluca Salvatori received the Editor’s Medal (“Eddies”) in recognition of their services as editors of books and Christmas Annuals published by the BSI.  An Eddy was also given posthumously to Paul Jeffers, who had recently unexpectedly passed “Beyond the Reichenbach.”

Karen Gurian was toasted as The Woman.

At the next day’s Sherlockian Cocktail Reception at the New York City Bar Association, Judge Albert Rosenblatt and his daughter, Betsy Rosenblatt, once again performed their remarkable rhyming summation of the previous year and of the Festivities.  In addition, Ray Jessel performed the song “Finding Words for Spring” from the musical Baker Street as well as a couple of other wonderful songs that he had composed. (See the section on Recordings, below.)

The Woman:
Karen Gurian (Mrs. Andrew Jay Peck).
What is The Woman honour?

List of 2010 BSI Dinner Attendees (not available at this time)

A recording of portions of the 2010 BSI Dinner is available at Harvard as part of the BSI Archive.

There are also three online videos from the January 16, 2010 Sherlockian Cocktail Reception.