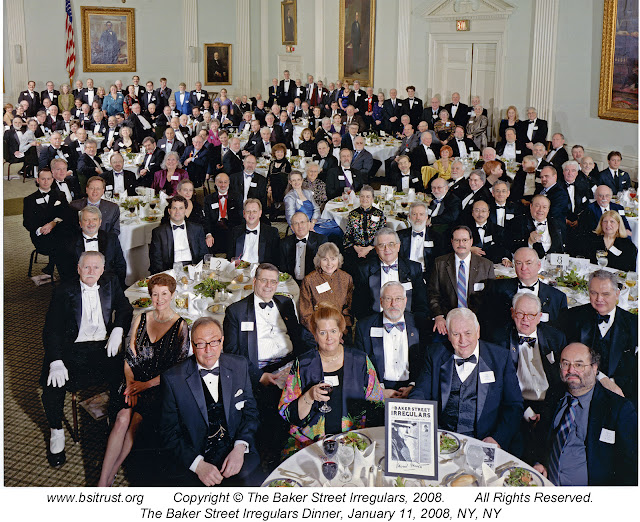 The dinner celebrating Sherlock Holmes’s 154th birthday was an evening replete with tradition, yet sprinkled with surprises.  This year also marked the 75th anniversary of the publication of Vincent Starrett’s The Private Life of Sherlock Holmes, and honoring Starrett was a theme of the evening.

From Michael Dirda, we learned that his Investiture namesake, Langdale Pike, was actually Vincent Starrett. Betsy Rosenblatt ripped Naked Is the Best Disguise to bits.  This year’s Morley-Montgomery Award winner, Ray Betzner, made a tribute toast to the Old Irregular, Vincent Starrett.

Seven deserving Irregulars received their Shilling.  Sherry Rose-Bond was honored with The Two-Shilling Award "for extraordinary devotion to the cause beyond the call of duty.”  Roy Pilot, Al Rosenblatt, and Christopher and Barbara Roden received the Editor’s Medal.  George McCormack was recognized for attending his 50th consecutive BSI Dinner.

Priscilla Juvelis was toasted as The Woman.  Unfortunately, weather prevented her from being present to receive said honor. This did not, however, lead to any interruptions in the presentation of impressive women at the Birthday festivities, as Wiggins seamlessly introduced a surprise guest, Heloise Rathbone, the granddaughter of Basil Rathbone from his first marriage.  Ms. Rathbone spoke about her grandfather and what it was like to be part of the Rathbone family.

The festivities were neatly wrapped up by Bob Thomalen, who read "A Long Evening with Holmes" by the late Bill Schweickert.

At the next day’s Sherlockian Cocktail Reception at the New York City Bar Association, attendees saw the New York premiere of The Other Side, a one-act play by Jerome Coopersmith who, more than 40 years before, wrote the book for the musical Baker Street.  The Other Side dealt with the differing approaches to Spiritualism of two prominent couples: Harry and Bess Houdini (portrayed by Paul Singleton and Elyse Locurto) and Jean and Arthur Conan Doyle (played by Mary Ellen Rich and Bob Thomalen).  Michael Pollak introduced the piece, which also featured Kate Karlson as a medium and Dana Richards on sound.  In addition, Judge Albert Rosenblatt and his daughter, Betsy Rosenblatt, once again performed their remarkable rhyming summation of the previous year and of the Festivities.

The Woman:
Priscilla Juvelis (Mrs. Daniel Posnansky)
What is The Woman honour?

"Stand with me here upon the terrace..."
(as named at this Dinner, not their year of passing)
Not named in the 2008 BSJ report of the Dinner.
What is the origin of “standing on the terrace?”

List of 2008 BSI Dinner Attendees (not available at this time)

A recording of portions of the 2008 BSI Dinner is available at Harvard as part of the BSI Archive.