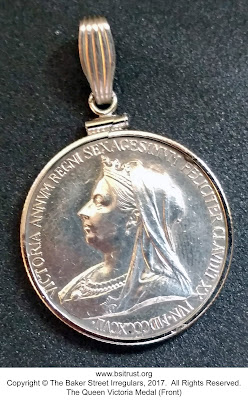 The Winter issue of the 1967 Baker Street Journal included an item on page 250 that said:

“A giant stride toward the quartering of the Union Jack with the Stars and Stripes occurred in October when Colin Prestige (“Captain Crocker” - or “Croker” as it is in the English editions), Hon. Secretary of the Sherlock Holmes Society of London, paid an eventful visit to this country. In New York he was honoured at two small gatherings, a cocktail party and a luncheon, and he was presented with a newly-created Irregular award, the Victoria Medal, for his contributions to the quartering referred to at the beginning of this paragraph. The medal is silver and was produced by the Royal Mint in 1897 to commemorate the Queen’s Diamond Jubilee.”

Thus, Julian Wolff gave to Colin Prestige the very first Queen Victoria Medal awarded by the BSI. Others would receive it through the years.  Two of them would receive it twice!  The Medal was not only awarded for promoting British-American relations, but was also given to both men and women who deserved it for devotion to duty.  The recipients have been: 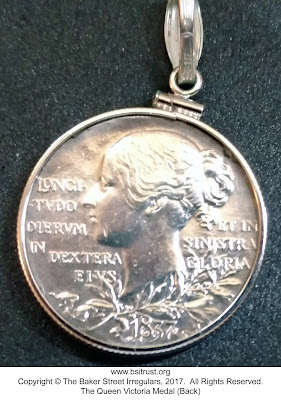 The Medals were not usually awarded at the BSI Dinner, but, rather, at other events, including the Saturday Cocktail Reception during the BSI Weekend, Silver Blaze Race in New York, Sherlockian Dinners at the Culinary Institute of America, John Bennett Shaw’s workshop, and other venues.

Dorothy Stix relates that the reason she received her second Medal was because Julian Wolff forgot that he had given her the first one.  Of course, both were well deserved.

The BSI Trust is grateful to Dorothy Stix who donated her Queen Victoria Medals (including the one shown in the photos above) to the Trust in 2017.

Thanks to Peter E. Blau, the keeper of all records, who supplied his list of recipients to the Trust for this web page.

Click on the above photos to see larger versions, and maximize your browser window to see the most detail.


Reports on the Award


In true irregular fashion, not all of the announcements of the awarding of the Queen Victoria Medal were published in The Baker Street Journal at the time that they occurred.  Some were mentioned in later issues. Others were not mentioned at all.

Awarded to Fritz Sonnenschmidt, The Baker Street Journal 41.3 (September 1991): 156 (available in the eBSJ)