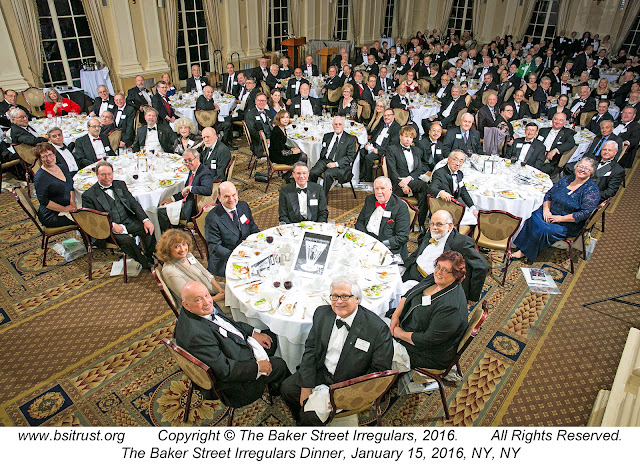 Sherlock Holmes’s 162nd birthday was feted by an enthusiastic group, also celebrating the 25th anniversary of the opening of the BSI to women.

Mike Whelan (the BSI's "Wiggins") honored Tony Montag for his more than fifty years as an Irregular. He also recognized others in attendance with Irregular longevity, including Peter Blau, Albert Silverstein, Russell Merritt, George McCormack, Chris Redmond, and James Saunders.

Bert Coules gave an account of Holmes on the radio in the 1930s, a tribute to Edith Meiser.   Peter Blau and Evelyn Herzog gave a "Duet: With an Occasional Chorus" account of the role of women in the BSI from 1934 to the present (which concluded with the singing - for the first time at an annual Dinner of the BSI - of the Adventuresses of Sherlock Holmes' "Reindeer Song").  Susan Rice gave a presentation on the rational roots of Holmes's feelings about women. As usual, Henry Boote, at the piano, led the musical entertainment.  Susan Dahlinger provided a marvelous rendition of a song from The Seven Per-Cent Solution film, as Nicholas Meyer was in attendance.  Betsy Rosenblatt did a great job singing "At Last," and Henry Boote charmed us with the singing of his own original composition, both celebrating women in the BSI. Francine Kitts, once again, performed a moving “Standing upon the Terrace” ceremony, remembering those whom we have lost.

Seven deserving Irregulars received their Shilling.  Nancy Browning was toasted as The Woman.  Tom Francis (former Chairman of the BSI Trust) received the Two-Shilling Award for extraordinary devotion to the cause beyond the call of duty.  Mike Whelan also appointed two more officers of the BSI: Michael Kean (as "Cartwright") and Bob Katz (as "Billy the Page").

Key to People in the 2016 BSI Dinner photo (not available at this time, but see the 2016 Table Seat Assignments (PDF)

Investitures:
Dana Cameron as The Giant Rat of Sumatra
Bert Coules as The Whole Art of Detection
Jenn Eaker as Mary Sutherland
John Durein as Wilson, the Notorious Canary Trainer
Jayantika Ganguly as The Great Agra Treasure
Timothy Greer as The Ragged Shaw
William Walsh as Godfrey Norton
* received Investiture at another event during the year
What is an Investiture?

The Woman:
Nancy Browning.
What is The Woman honour?

A recording of portions of the 2016 BSI Dinner is available at Harvard as part of the BSI Archive.