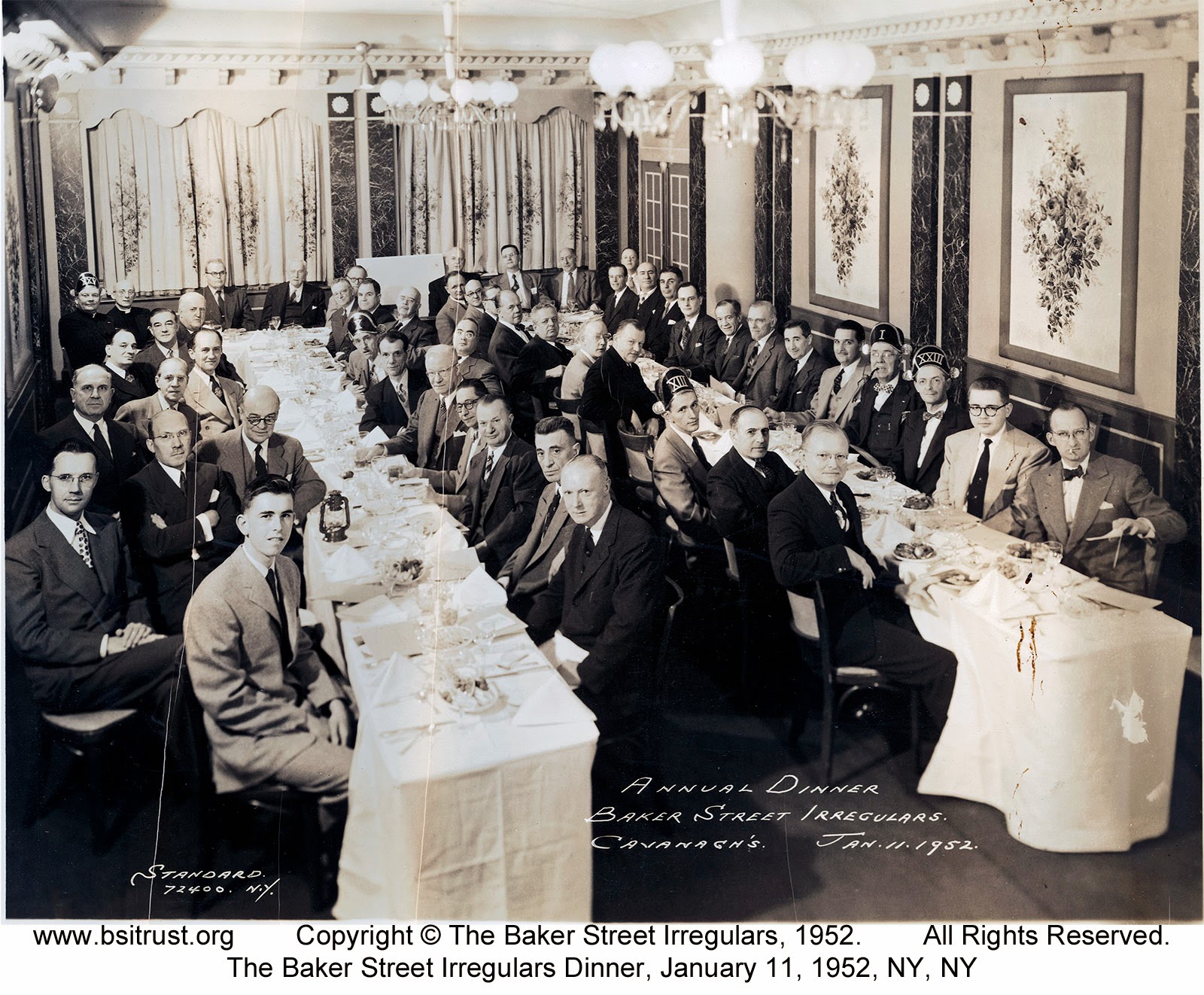 Festivities commemorating the 98h anniversary of the Master’s birth—and inspired this year by Dr. John H. Watson’s 100th birthday—opened with dispatches from scion societies in diverse locations such as Boston, Cleveland, Denmark, England, and France. An “ominous and threatening” letter arrived from Professor James Moriarty at Rollins College in Orlando, Florida. Elmer Davis, serving as Gasogene-cum-Tantalus in Christopher Morley’s regrettable absence, introduced Mr. Sherlock Holmes Evans of Massilon, Ohio to attendees. Mr. Evans, unsurprisingly, regaled attendees with the experiences that “his baptismal name” has afforded him.

Edgar W. Smith, in his capacity as Buttons-cum-Commisionaire, presented a paper on “Dr. Watson and the Great Censorship,” positing that the good doctor published his stories only when he believed Holmes was dead or had unequivocally retired. Mr. Green, a representative of the Parker Game Corporation, presented each attendee with a set of “Clue: the Great New Sherlock Holmes Game.” Play commenced, under the Acting-Gasogene’s oversight.

Eight members were honored for achieving their Investiture.  After Scion Society reports were proffered, Owen P. Frisbie, of the Five Orange Pips of Westchester County, presented the annual quiz, “Twenty Knights with Sir Arthur.” Robert G. Harris of the Amateur Mendicants of Detroit was the victor.

The festivities concluded on the “reminding note that 1954 will see the celebration of the Master’s own centennial.”

Investitures:
William S. Baring-Gould as The Gloria Scott
Edward Bartlett as The Man with the Twisted Lip
Lloyd H. Denton as The Noble Bachelor
Robert G. Harris as The Creeping Man
Richard H. Hoffman as The Beryl Coronet
James C. Iraldi as The Blanched Soldier
James Nelson as Lady Frances Carfax
Morris Rosenblum as Petrus Atri (Black Peter), changed to The Greek Interpreter
What is an Investiture?