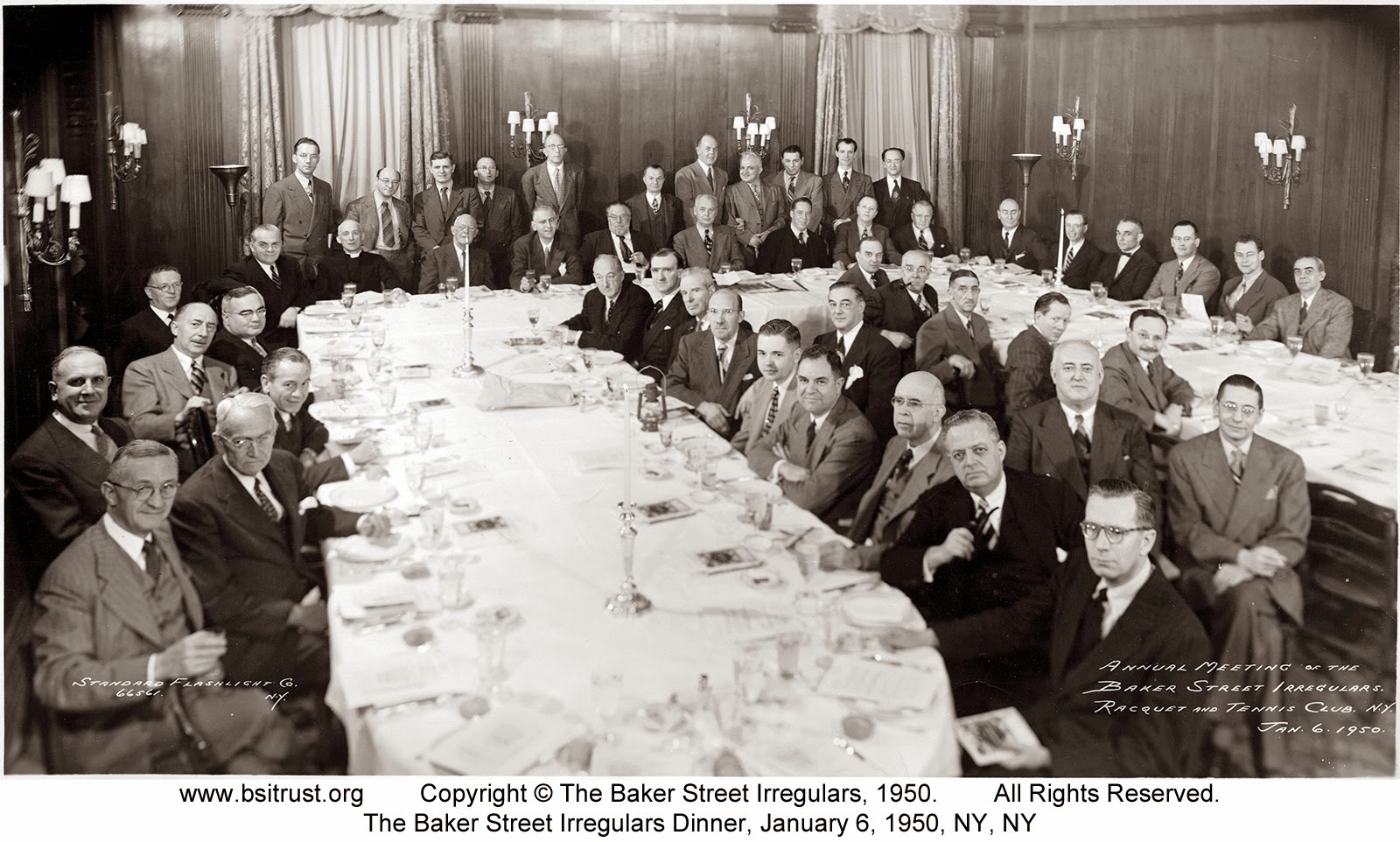 The 96th anniversary of the Master’s birth opened with the “traditional preliminary” of oysters, cocktails, and sherry.  The proceedings were promptly called to order at 7:00pm.  Canonical toasts were proposed by Robert Keith Leavitt, James Montgomery, and Frank A. Waters.  The senior chaplain, Rev. Leslie Marshall, delivered the Sherlock prayer; and the Junior Chaplain, Rev. Harold Clemens, delivered the antiphony of the Musgrave Ritual. At the conclusion of the Irregular anthem, Charles Honce proposed a silent toast to Harvey Officer, who had first offered this at the 1942 meeting.

Toasts, messages of regret from those absent, papers, and disputations were concluded with James Montgomery’s “brilliant and always-clamored-for” rendition of Irene Adler’s recording and his own arrangement of the Irregular Song. Eight members received their Investitures. Christopher Morley, as Gasogene-cum-Tantalus, announced that the Irregulars’ official colors are purple, gray, and mouse, “as symbolic of the deterioration of the Master’s dressing-gown,” and that the BSI had secured the American distribution rights for The London Mystery Magazine. The evening closed out with Edgar W. Smith, Buttons-cum-Commissionaire, presenting on his India trip with the title “You Have Not Been in Afghanistan, I Perceive.”

Revised Key to People in the 1950 BSI Dinner Photo (PDF)

Investitures:
Clifton R. Andrew as Shoscombe Old Place
Nathan L. Bengis as The Lion's Mane
Frederic Dannay as The Dying Detective
Owen P. Frisbie as The Musgrave Ritual
Charles Goodman as The Stockbroker's Clerk
Howard Haycraft as The Devil's Foot
Fulton Oursler as The Abbey Grange
Jerry Neal Williamson as The Illustrious Client
What is an Investiture?

1950 BSI Dinner Minutes (digitized images at Harvard)
Note: the minutes repeat some past investitures from 1944 and 1945.

Revised Key to People in the 1950 BSI Dinner Photo (PDF)