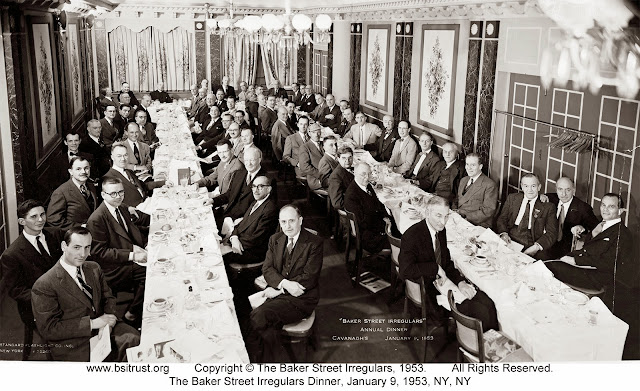 Earle F. Walbridge, BSI, updated the assembled on the unveiling of a plaque at the Criterion Bar in London under the coordinated efforts of the Baritsu Chapter and the Sherlock Holmes Society. Paul Gore-Booth of the Red Circle of Washington, D.C. and Robert G. Harris of the Amateur Mendicants of Detroit then described the successful efforts to install a plaque commemorating Sherlock and Watson’s first meeting in the laboratory of St. Bartholomew’s Hospital. The Amateur Mendicants of Detroit presented a $100 check to initiate the necessary financing for this project. Edgar W. Smith, as Buttons-cum-Commissionaire, was empowered to proceed with the necessary next steps and to report on the project’s progress.

The annual Five Orange Pips of Westchester County quiz was presented, under the direction of Owen P. Frisbie, BSI. Robert G. Harris of the Amateur Mendicants was the victor.

The minutes note that the birthday dinner was adjourned with “a rising pledge to foregather again, in 1954, in celebration of the Centenary of the best and wisest of men.”

Investitures:
Stephen F. Crocker as The Norwood Builder
Thayer Cumings as His Last Bow
Baron Paul H. Gore-Booth as The Three Gables
Milton C. Lang as The Abbey Grange
Joe Palmer as Silver Blaze (posthumous)
What is an Investiture?

"Stand with me here upon the terrace..."
(as named at this Dinner, not their year of passing)
Howard Collins (by Fred Dannay)
Judge Robert France (by Lloyd H. Denton)
Fulton Oursler (by Fletcher Pratt)
Joe Palmer (by Tom Stix)
Ronald (Buck) Weaver (by Robert G. Harris)
What is the origin of “standing on the terrace?”