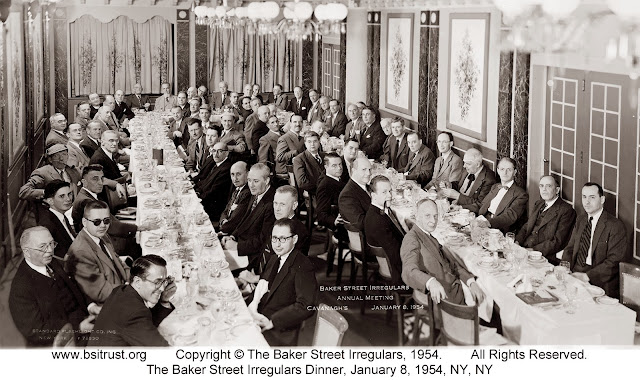 On the hallowed occasion of the 100th birthday of “that great and good man,” Sherlock Holmes, 65 members from all over the world gathered to pay tribute. Fletcher Pratt, BSI, stood in for Christopher Morley as Gasogene-cum-Tantalus. As befitted the consulting detective’s global reach, birthday greetings arrived from an array of localities: Boston, Chicago, Denmark, Holland, Iowa, London, Minneapolis-St. Paul, Paris, and Quebec, to enumerate but a few.

Carl Anderson of the Sons of the Copper Beeches led a discussion on the short-lived run of Basil Rathbone’s Broadway play about Holmes, which ran for only three performances in October 1953. Scion society reports were presented. Richard W. Clarke of the Five Orange Pips of Westchester County presented a single-question quiz: “Who gave Sherlock Holmes a blue phial containing poison?” James Iraldi of the Musgrave Ritualists took first prize, a stock certificate of the Franco-Midland Hardware Company.

Attendees were regaled with two vivid pieces of Sherlockian footage: a film of Silver Blaze Handicap at Aqueduct the previous August (plus a recording of the race with sportscaster Red Smith giving color) and a documentary produced by W.T. Rabe of the Amateur Mendicants of Detroit from his own honeymoon that recounted the Master’s 1891 flight from London to Meiringen, culminating in dramatic shots of the Reichenbach Falls.

At 11pm, a necessary toast was raised to Christopher Morley, Founder of the Baker Street Irregulars. Learned papers and Canonical disputations held the floor for an hour, taking “a deeper, more searching, and more reverent course than has been evident in many a year...the presence of the Great Man was everywhere palpable.”

As an adjunct to the momentous centenary, a poll had been conducted prior to the birthday dinner to determine the “10 Best “and “10 Least” of the stories. (Peruse the results and compare them with Arthur Conan Doyle’s own rankings put forth in the Strand Magazine in the April 1954 issue of the Baker Street Journal, vol. 4, no. 2, pp. 117-119.)

At the stroke of midnight, the remaining assembled members raised a standing toast in silence:

Investitures:
John V. L. Hogan as The Aluminium Crutch
Leon S. Holstein as The Tired Captain
Tony Montag as Vamberry, the Wine Merchant
Robert R. Pattrick as The Politician, the Lighthouse, and the Trained Cormorant
Remsen Ten Eyck Schenck as The Tarleton Murders
A. Carson Simpson as The Conk-Singleton Forgery Case
What is an Investiture?

"Stand with me here upon the terrace..."
(as named at this Dinner, not their year of passing)
Nigel Bruce (by Peter Greig)
Rev. Howard Clemens (by Allen Robertson)
Ivar Gunn (by the Marquis of Donegall)
What is the origin of “standing on the terrace?”