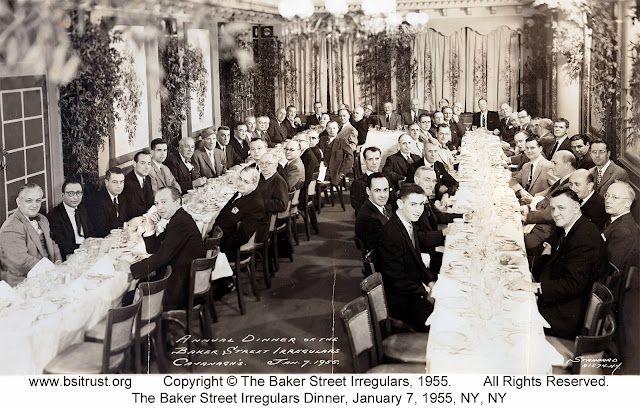 Rex Stout shared an experience that, after spending all evening “around the festive board from which all but he and a visitor from Britain had been retired,” he had the privilege of listening to a “trenchant and searching exegesis” of the Canon…from Winston Churchill.

At midnight, Charles Honce proposed the toast: “To the Best and Wisest Man Whom We Have Ever Known!” Edgar W. Smith, in his capacity as Buttons-cum-Commisionaire, notes in the minutes that when he departed the festivities at 1am, twenty guests remained “who had not even then had enough – as none of us ever shall have enough – of Sherlock Holmes.”

Investitures:
Alvin E. Blomquist as Isadora Persano
James H. Bready as The Disappearance of James Phillimore
Anatole Chujoy as The Old Russian Woman
Marquis of Donegall as The Manor House Case
Don Hardenbrook as Huret, the Boulevard Assassin
Rosser W. Hunter as The Singular Adventures of the Grice Patersons
Edward Kilroe as The Sudden Death of Cardinal Tosca
Arthur L. Levine as The Cutter Alicia
William Passen as The Camberwell Poisoning Case
W. T. Rabe as Colonel Warburton's Madness
Otis R. Rice as The Paradol Chamber, changed to The Non-Conformist Clergyman
Red (Walter W.) Smith as The Netherland-Sumatra Company
Thomas A. Whelan as The Vatican Cameos
H. B. Williams as Old Abrahams
What is an Investiture?