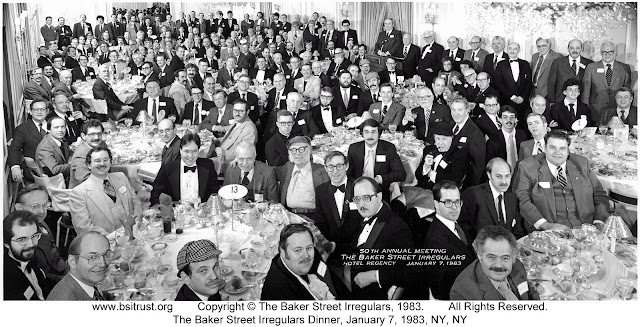 The 129th anniversary of the Master’s birthday featured many distinguished guests, including the Dean and Assistant Dean of Columbia College. Francine Morris (Mrs. Wayne B.) Swift was toasted as The Woman. Fifteen Irregular Shillings were given out.  Stephen Stix, “the only third-generation Investitured Irregular,” and Edward F. Clark, delivered post-prandial talks, followed by “our resident genius,” Isaac Asimov. Wolff’s report in the Baker Street Journal effusively concludes: “Since there is nothing that can follow Isaac, we then adjourned, after bestowing upon him the highest honour of the Irregulars, the Two-Shilling Award.” George Fletcher and Ralph E. Edwards also shared in the Two-Shilling glory.

The Woman:
Francine Morris (Mrs. Wayne B.) Swift
What is The Woman honour?

"Stand with me here upon the terrace..."
(as named at this Dinner, not their year of passing)
Not listed in the 1983 BSJ report.
What is the origin of “standing on the terrace?”

List of 1983 BSI Dinner Attendees (not available at this time)

A recording of parts of the 1983 BSI Dinner is available at Harvard as part of the BSI Archive.