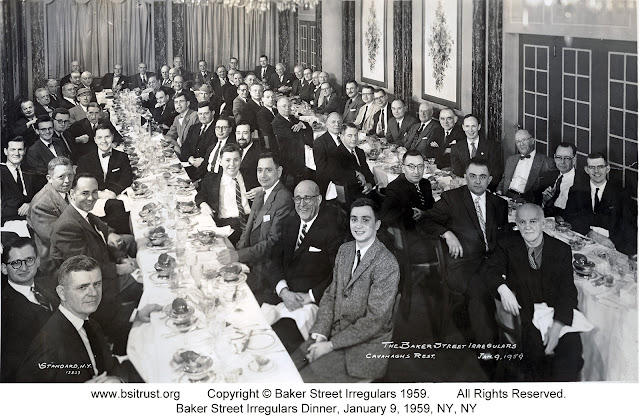 Sixty eight Irregulars and guests gathered to commemorate the Master’s 105th birthday. John MacVane, a leading radio correspondent for more than three decades, stood in for an ill Rex Stout and reported on the profound influence exercised by Mycroft over the United Nations through his intermediary, Cartwright, who makes an appearance as a young boy in The Hound of the Baskervilles. The assemblage was, of course, sworn to secrecy on this account. There was a tribute to Earle P. Walbridge, who attended all BSI meetings from the beginning. The inaugural winner of the Morley-Montgomery Award was announced as (noted science fiction author) Poul Anderson, of the Scowrers of San Francisco, for his “Irregular Poetics.” To commemorate the award’s namesakes, William Baring-Gould proposed a toast to the memory of the towering Christopher Morley, and Carl Anderson suggested likewise for Jim Montgomery, a professional opera singer and a founding member of the Gilbert & Sullivan Players of Philadelphia. [Please see the Explanation of BSI Honours & Terms for background on this award.]

Six members received their Irregular Shilling. After worldwide reports from Scion Societies were read, Mr. C. R. Andrew of the Scandalous Bohemians of Akron, Ohio proposed a round-table challenge, wherein each member was called upon to address a query propounded to him, or, if stumped, to throw the question open to the assemblage. The minutes evidence that the “erudition manifested surpassed all expectations, and the Challenges proceeded, in natural course, to the Canonical point of whole-hearted Disputation.” At 11:54pm, James C. Iraldi offered the toast to “To the Best and Wisest Man Whom We Have Ever Known.”

Investitures:
S. Tupper Bigelow as The Five Orange Pips
Peter E. Blau as Black Peter
Robert C. Clyne as The Opal Tiara
A. D. Henriksen as A Case of Identity
Edward Starr as The Bogus Laundry Affair
Robert H. Steele as The Scowrers*
Allison Stern as Silver Blaze
* received Investiture at another event during the year
What is an Investiture?

The Woman:
Maria von Krebs ("the Lady of the Evening")
What is The Woman honour?

"Stand with me here upon the terrace..."
(as named at this Dinner, not their year of passing)
None listed in the 1959 Minutes or BSJ report.
What is the origin of “standing on the terrace?”