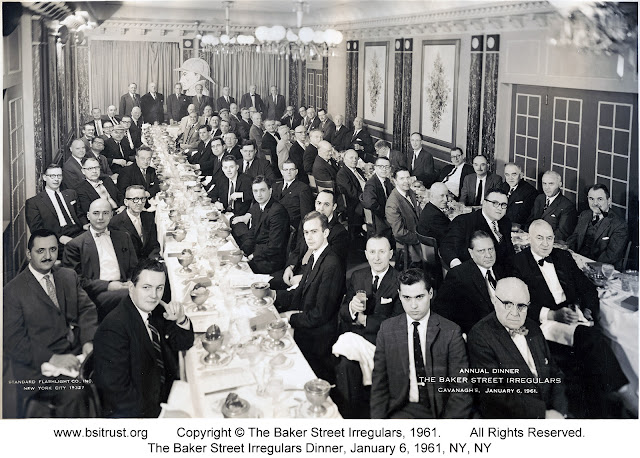 Seventy one Irregulars celebrated Sherlock Holmes’ 107th Birthday, under the oversight of Rex Stout. The first two toasts were offered to women—Julian Wolff toasted “A Certain Gracious Lady,” Mrs. Edgar.W. Smith, and Carl Anderson toasted Mrs. James Montgomery, “The Woman.” After the traditional recital of the BSI Constitution and Buy-Laws and the other canonical toasts, William S. Hall delivered a tribute to Edgar W. Smith, who had passed away the previous year, with Howard Haycraft and James Buchholtz adding appropriate remarks.

Ten individuals received their Irregular Shilling. Two Toms then delivered compelling analyses: Tom Stix (Sr. - per Dorothy Stix, BSI) presented a new perspective on the Abbey Grange affair, and Tom McDade discussed the phrenological Holmes. Missives from the Sherlock Holmes Society of London and from Scions around the globe were read aloud. Earle Walbridge delivered the closing toast to the Great Man, and the assembled guests did their utmost to live up to the words of Vincent Starrett, as quoted by James Buchholtz: “Edgar would have wanted us to have a good time tonight.”

Investitures:
Herbert Brean as The Ferrers Documents
Thomas L. Daniels as The Giant Rat of Sumatra
Cornelis Helling as The Reigning Family of Holland*
Henry Lauritzen as The Royal Family of Scandinavia*
Douglas Lawson as The Grosvenor Square Furniture Van
George McCormack as The Woman at Margate, changed to Hosmer Angel
R. Irving Paxton as Mr. Sandeford, of Reading*
Colin G. Prestige as Captain Jack Crocker*
Alexander M. Robb as The Addleton Tragedy
Theodore G. Schulz as The Amateur Mendicant Society
Robert H. Schutz as The Arnsworth Castle Business
Edgar P. Smith as The Smith-Mortimer Succession Case
Kenneth Souser as Vigor, the Hammersmith Wonder
Thomas L. Stix Jr. as The Case of Bert Stevens, changed to The Norwood Builder
* received Investiture at another event during the year
What is an Investiture?

The Woman:
Constance (Mrs. James) Montgomery
What is The Woman honour?

"Stand with me here upon the terrace..."
(as named at this Dinner, not their year of passing)
Edgar W. Smith
John V.L. Hogan
Robert Pattrick
Otis Rice
What is the origin of “standing on the terrace?”