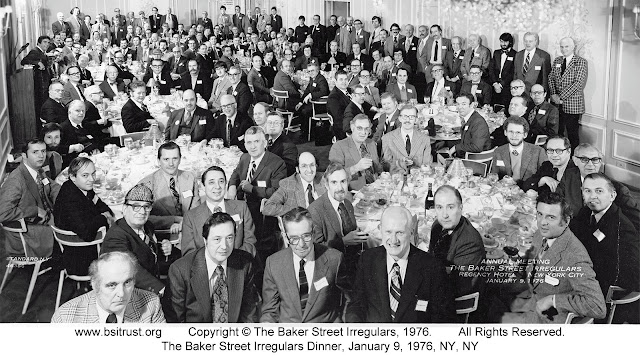 More than 150 revelers gathered at the Regency to celebrate the 122nd anniversary of Sherlock Holmes’s birth, taxing “the walls of our meeting place beyond its capacity.” This joyous occasion saw the designation of “The Woman” bestowed upon Rosemary (Mrs. Edward F.) Clark and the presentation of “unusually good” scholarly papers. Ten Investitures were awarded. Among those receiving the Irregular Shilling were Isaac Asimov, Otto Penzler, and Jack Tracy.

Key to People in the 1976 BSI Dinner Photo (digitized image at Harvard)
Three pages. Front, interior, and back. Sequence 62-64

Investitures:
Isaac Asimov as The Remarkable Worm
W. E. Dudley as The Papers of Ex-President Murillo**
Dr. James Lione as My Old Friend Charlie Peace
Donald A. McDonough as Bodymaster McGinty
Michael Murphy as The Noble Bachelor
Donald P. Musgrave as Lowenstein of Prague, changed to Reginald Musgrave
Otto Penzler as The King of Bohemia
Jack Tracy as A Case of Identity**
Rev. Wayne Wall as Holy Peters
Ralph Wroblewski as Captain Teddy Marvin**
* received Investiture at another event during the year
** in absentia
What is an Investiture?

The Woman:
Rosemary (Mrs. Edward F.) Clark
What is The Woman honour?

"Stand with me here upon the terrace..."
(as named at this Dinner, not their year of passing)
Not listed in the 1976 BSJ report.
What is the origin of “standing on the terrace?”

List of 1976 BSI Dinner Attendees (not available at this time, but see Key to the Photo, above)