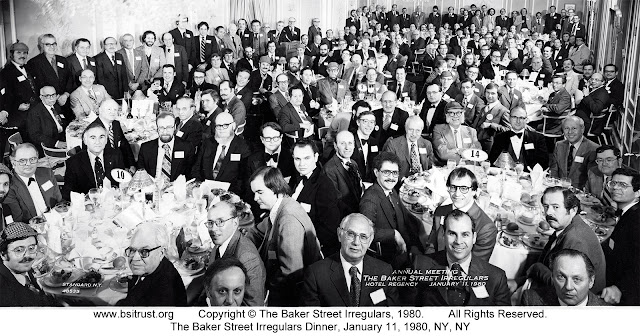 The 1980 Dinner marked Sherlock Holmes’s 126th birthday.  After the first Canonical toast to The Woman, Peggy (Mrs. H. W.) Starr was given the honour.  The dinner included all rites and ceremonies faithfully observed.  The entire programme was carried out as usual, except for one delightful interruption: “an Irregular committee took over the proceedings and delivered tributes to the surprised, flattered, and blushing Commissionaire on the occasion of his seventy-fifth birthday.”

Investitures:
Bruce R. Beaman as The Yellow Face**
John Stevens Berry as The Hammerford Will Case**
Stafford G. Davis as Horace Harker
J. Devereux deGozzaldi as The Speckled Band**
Robert Watson Douty as The Priory School
Samuel M. Gerber as The Final Problem
Alvin F. Germeshausen as Baron Dowson**
Charles E. Henry as The Lion's Mane
Jeffrey L. Michelman as Sutro, the Lawyer
Robert A. Moss as The Case of Fairdale Hobbs**
Hartley R. Nathan as The Penang Lawyer
Frank F. Reilly as The Boscombe Valley Mystery
* received Investiture at another event during the year
** in absentia
What is an Investiture?

The Woman:
Peggy (Mrs. Herbert W.) Starr
What is The Woman honour?

"Stand with me here upon the terrace..."
(as named at this Dinner, not their year of passing)
Not listed in the 1980 BSJ report.
What is the origin of “standing on the terrace?”

List of 1980 BSI Dinner Attendees (not available at this time)

The Musgrave Ritual (digitized image at Harvard)
Read at the 1980 BSI Dinner.