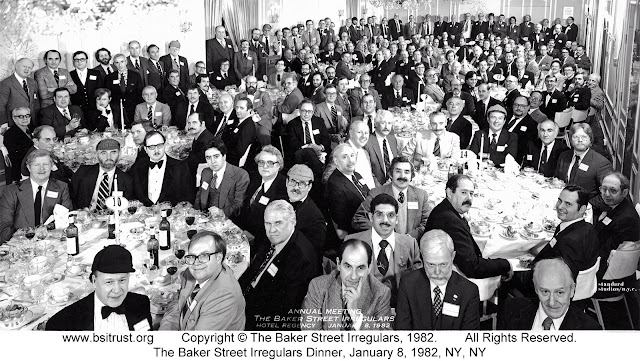 Julian Wolff’s report in the Baker Street Journal regarding the 128th anniversary of Holmes’s birth is succinct yet effusive. The evening’s repast was deemed “sumptuous,” recipients of honours were indeed “deserving,” and the proceedings afforded “many desirable keepsakes.” Thirteen Irregulars were invested at the Dinner. Earlier in the day, the BSI invested its second female member (the first being Lenore Offord in 1958).  Lisa McGaw, who oversaw the William Gillette Luncheon for many years, was awarded the Irregular Shilling as “Mrs. Hudson” at that luncheon. Wolff’s notes on the evening conclude with the following bon mot: “Asimov was in unusually (perhaps usually) fine fettle and literally brought down the house.”

Investitures:
Peter G. Ashman as Peter Steiler the Elder (in absentia)
Morency R. Dame as Colonel Lysander Stark (in absentia)
Orval C. Graves as Whitaker's Almanack
Howard L. Lachtman as The Matilda Briggs (in absentia)
W. Kenneth Lane as Wilson Hargreave, of the New York Police
Brian R. MacDonald as The Famous Card Scandal of the Nonpareil Club (in absentia)
Lisa McGaw as Mrs. Hudson*
Frederic H. Mende as Lord Holdhurst
Richard H. Miller as The Grice Patersons in the Island of Uffa
Bruce R. Parker as A Garrotter by Trade
J. Warren Scheideman as Count Von und Zu Grafenstein (in absentia)
Floyd Sherrod as The Case of John Vincent Harden (in absentia)
Milton A. Silverman as Barker, My Hated Rival
Fritz Sonnenschmidt as Simpson's*
Richard Warshauer as Godfrey Staunton (in absentia)
* received Investiture at another event during the year
What is an Investiture?

The Woman:
Barbara (Mrs. John B.) Koelle
What is The Woman honour?

"Stand with me here upon the terrace..."
(as named at this Dinner, not their year of passing)
Frank Reilly (a noted Sherlockian)
Willmer A. Hoerr (The Famous Card Scandal of the Nonpareil Club, 1958)
Aubrey Campbell Roberts (a noted Sherlockian)
Robert L. Fish (Barker, My Hated Rival, 1971)
James Nelson (Lady Frances Carfax, 1952)
David Levinson (Count Von und Zu Grafenstein, 1965)
Philip Dalton (Past Chairman of The Sherlock Holmes Society of London)
What is the origin of “standing on the terrace?”

List of 1982 BSI Dinner Attendees (not available at this time)

A recording of parts of the 1982 BSI Dinner is available at Harvard as part of the BSI Archive.

Program to a Performance of the Hound of the Baskervilles (digitized images at Harvard)
Distributed at the 1982 BSI Dinner by Bruce R. Beaman, BSI

Second Woman Invested
As listed above, Lisa McGaw, who organized the William Gillette Luncheon (held on the same day as the BSI Dinner) for many years, was the second woman to be invested in the BSI (and the last until 1991). She never attended a BSI Dinner.  Read more about Ms. McGaw and her Investiture at the Adventuresses of Sherlock Holmes website.