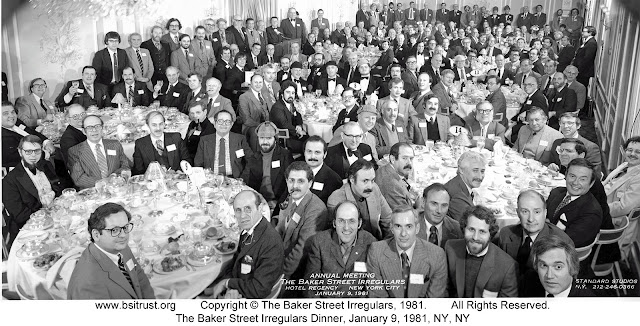 In the Baker Street Journal, the Commissionaire recorded that the 1981 Dinner marking Sherlock Holmes’s 127th birthday was “one of its best.” Distinguished guests included visitors from Scandinavia: Nils Nordberg, Åke Runnquist, and Ted Bergman (“The Honourable Philip Green”). Ad (Mrs.Will) Oursler was toasted as The Woman. The readings of Sherlock Holmes’s Prayer, the Musgrave Ritual, and the Constitution and Buy-Laws were stirring; the Canonical Toasts were especially witty and clever. Members stood on the terrace “to have our last quiet talk with those stalwarts who had dropped from the ranks since we had last met.” Eleven Irregular Shillings were bestowed. A number of characteristically witty talks were delivered, with Edward Clark’s oration being singled out for particular mention.

The Commissionaire was even presented with two medals from the Maiwand Jezails and the Irish Secret Society at Buffalo. Attendees departed at the evening’s close “with the determination to outdo ourselves next year, if possible.”

Investitures:
Howard Brody as Anstruther
John F. Farrell as The Tiger of San Pedro
Kenton A. Johnson as A Remarkable Invention
Irving Kamil as Monsieur Oscar Meunier, of Grenoble
Gene A. Leeb as The Franco-Midland Hardware Company
Tom McGee as Wilson, the Notorious Canary-Trainer
Nils Nordberg as A Norwegian Named Sigerson
Åke Runnquist as Jacob Shafter
David Skene-Melvin as The Duke of Holdernesse
Edgar B. Smith as Dr. Moore Agar
Harlan L. Umansky as Jonathan Small
* received Investiture at another event during the year
What is an Investiture?

The Woman:
Ad (Mrs. Will) Oursler
What is The Woman honour?

"Stand with me here upon the terrace..."
(as named at this Dinner, not their year of passing)
Richard W. Clarke (The Copper Beeches, 1949)
Norman Schatell (Jonathan Small, 1977)
Frank V. Morley (The Three Garridebs, 1944)
Jussi Kurikka (a leading Sherlockian in Finland)
What is the origin of “standing on the terrace?”

List of 1981 BSI Dinner Attendees (not available at this time)

A recording of the entire 1981 BSI Dinner is available at Harvard as part of the BSI Archive.