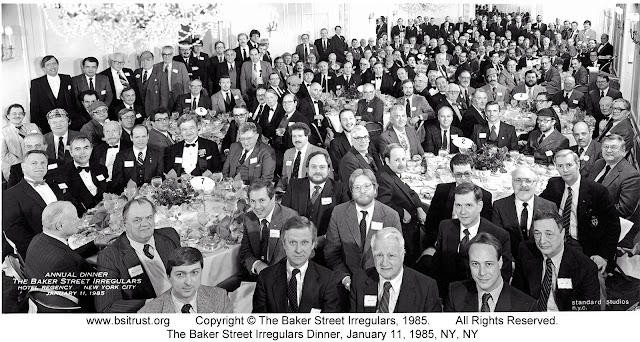 The 131st anniversary of Holmes’s birth witnessed a “memorable” program, including Holmesian songs (prepared by none other than Isaac Asimov) and John Bennett Shaw’s stories of early Sherlockians. Thirteen individuals received their Irregular shillings. Albert M. Rosenblatt “exercised his judicial powers” to inform the attendees that this date also marked the Commissionaire’s eightieth birthday, to “suitably raucous reactions.”

The reception at the Grolier Club the next day, January 12, saw the announcement of the Baker Street Journal’s new editor, Philip Shreffler.

Investitures:
Alan Addlestone as The Addleton Tragedy
Walter P. Armstrong Jr. as Birdy Edwards
Bryce L. Crawford Jr. as The Solitary Cyclist
Bernard Davies as A Study in Scarlet*
Wilfrid M. de Freitas as The Right Honourable Trelawney Hope
James J. De Stefano as The St. Pancras Case*
Anthony Duke as Hugh Boone
Richard Lancelyn Green as The Three Gables
Derham Groves as Black Jack of Ballarat
Michael Hardwick as The Sign of the Four*
Michael P. Hodel as Sir James Walter
Alan R. Kaplan as Charles Augustus Milverton
Arthur Liebman as Vamberry, the Wine Merchant
W. R. Michell as The Rock of Gibraltar
Herbert H. Middleton as Ionides, of Alexandria
Peter Wood as The Second Stain
* received Investiture at another event during the year
What is an Investiture?

The Woman:
Jane L. (Mrs. William D.) Jenkins
What is The Woman honour?

"Stand with me here upon the terrace..."
(as named at this Dinner, not their year of passing)
Not listed in the 1985 BSJ report.
What is the origin of “standing on the terrace?”

List of 1985 BSI Dinner Attendees (not available at this time)

1985 The Woman Dinner Menu (digitized images at Harvard)
Two pages. Cover and interior and list of The Women. Sequence 109-110.