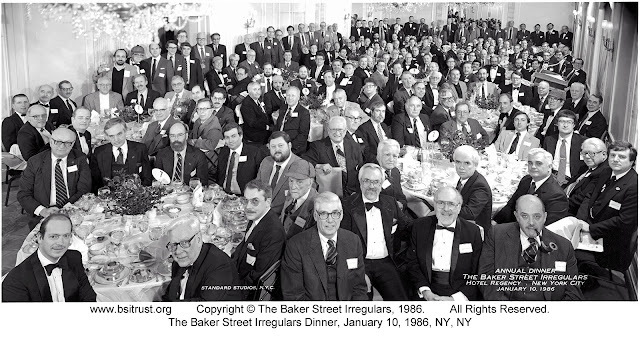 The 132nd anniversary of Holmes’s birth included all the traditional rites and procedures. Walter Pond’s daughter, Nancy Pond, was toasted as The Woman. Philip R. Brogdon offered a splendid toast to Sherlock Holmes as Dr. Watson’s (and our) best friend.  John Bennett Shaw displayed, and defended, a newly discovered life mask of Sherlock Holmes.  Isaac Asimov doubled as tenor and baritone in a Canonical parody of Gilbert and Sullivan.   However, the major news from this Dinner was Julian Wolff’s announcement that he was retiring from the leadership of The Baker Street Irregulars (having held the job longer than anyone else).  Julian said that he decided to be the first to get out alive and that he had chosen Thomas L. Stix, Jr.as his successor.

At reception at The Grolier Club the next day, Julian celebrated his eighty-first birthday. Tom Stix’s first official act as our Wiggins was his announcement that Julian will be our honored Commissionaire Emeritus.

Investitures:
Erik Beckman as Stapleton
Robert Bisio as Shinwell Johnson
John D. Constable as The Crooked Man
Barton A. Eberman as The Hound of the Baskervilles
Joseph Fink as The Martyrdom of Man
David L. Hammer as Major-General Stoner
Andrew Malec as The Strange Old Book Collector
C. Paul Martin as Dr. Leslie Armstrong
Robert E. Robinson as The Hansom Cab
Steven Rothman as The Valley of Fear
Richard B. Shull as An Actor and a Rare One
Gordon R. Speck as Colonel James Barclay
James P. Suszynski as The Dying Detective
Richard A. Wein as Silver Blaze*
Don Werby as Old Abraham
* received Investiture at another event during the year
What is an Investiture?

The Woman:
Nancy Pond (Walter Pond’s daughter)
What is The Woman honour?

"Stand with me here upon the terrace..."
(as named at this Dinner, not their year of passing)
Not listed in the 1986 BSJ report.
What is the origin of “standing on the terrace?”

List of 1986 BSI Dinner Attendees (not available at this time)