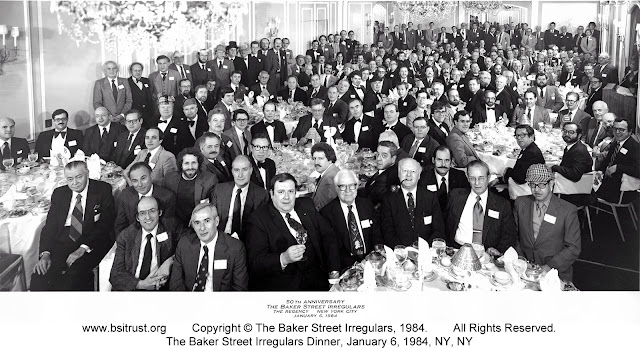 As you can hear in our recording below of Isaac Asimov, the 1984 BSI Dinner was highly entertaining. It started with a Dinner invitation that paid tribute to the 50th anniversary of the first BSI Dinner in 1934. Fittingly, this occasion saw “record attendance of enthusiastic Sherlockians from many nations and four separate continents.”  Fourteen participants were invested and received their Irregular shillings. The proceedings sounded truly sublime. To wit, Julian Wolff reported in the Baker Street Journal:

“The programme was unusually interesting and included a great effort by Isaac Asimov, our Resident Genius, as well as eloquent talks by Bliss Austin and Robert Harris, both of whom recalled earlier days of the Irregulars. It was a contented lot of Sherlockians who left at the end of the dinner with cries of “Wait until next year!”

The Woman:
Eleanor (Mrs. William P.) Schweickert
What is The Woman honour?

"Stand with me here upon the terrace..."
(as named at this Dinner, not their year of passing)
Not listed in the 1984 BSJ report.
What is the origin of “standing on the terrace?”

List of 1984 BSI Dinner Attendees (not available at this time) 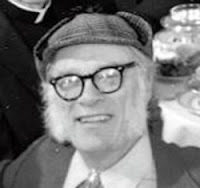 Isaac Asimov at a BSI Dinner

Famed science fiction author Isaac Asimov tells a funny story about his recent triple bypass surgery and his thoughts about dying, then sings a song about Sherlock Holmes in this 8-minute vignette from the 1984 BSI Dinner.  Asimov was invested at the 1976 BSI Dinner.

A recording of parts of the 1984 BSI Dinner is available at Harvard as part of the BSI Archive.

Asimov, Isaac, Lyrics to the song he sang at the 1984 BSI Dinner (digitized images at Harvard)
One page. Sequence 104.
This page also includes the lyrics to a song Asimov wrote for the 1985 BSI Dinner.

Robinson, Robert, Toast to Mycroft Holmes (digitized images at Harvard)
Two pages. The second page is the 2007 cover letter to Julie McKuras, conveying the toast to the BSI Trust. Sequence 105-6.
This toast was written by Robert Robinson, BSI and was presented at the 1984 BSI Dinner.