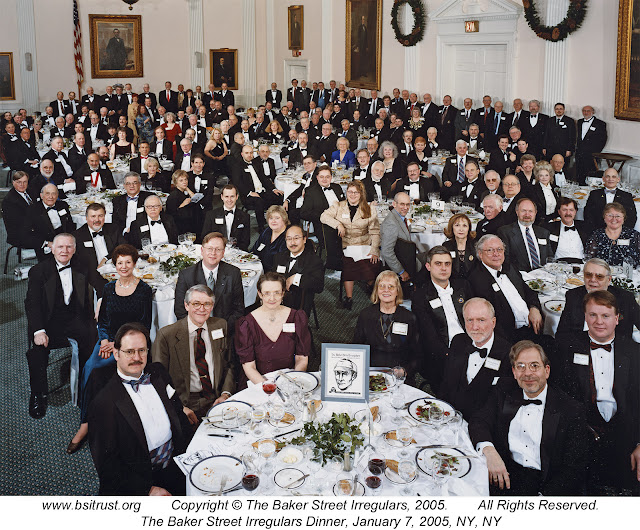 Nicholas Meyer revealed the contents of some of the letters found in a tin box recently acquired by a wealthy sultan.  David Stuart Davies and Kathryn White presented a hilarious radio-play of the story “The Musgrave Ritual.”  Steven Doyle revealed that he is related to the noted author, including family photos showing him with his Uncle Arthur, as well as with other luminaries, such as Rathbone, Brett, and Morley.

The assembled were informed that, for the first time in the Birthday Dinner’s history, Irene Adler herself would be serenaded with “We Never Mention Aunt Clara.”  Inga Swenson, of the musical Baker Street, emerged and was duly serenaded.  The Toast to an Old Irregular was replaced this year by a Centenary Tribute to Julian Wolff, with tributes from Peter Blau, Andrew Fusco, Andrew Jay Peck, and Wiggins to the long-time Commissionaire, whose involvement with the BSI spanned a quarter of a century.

Debbie Hall was toasted as The Woman. Six Irregulars received their Shilling at the Dinner.  Les Klinger, Julie Rosenblatt, and Steve Rothman were each honored with The Two-Shilling Award "for extraordinary devotion to the cause beyond the call of duty.”

Susan Vizoskie concluded the evening’s program with a reading of Vincent Starrett's sonnet "221B."

At the next day’s Sherlockian Cocktail Reception at the National Arts Club, Judge Albert Rosenblatt and his daughter, Betsy Rosenblatt, once again, performed their remarkable summation of the previous year and of the Festivities in verse.

Investitures:
John Bergquist as The King of Scandinavia
Peter Calamai as The Leeds Mercury
Neil Gaiman as The Devil's Foot
Art Renkwitz as The Bar of Gold
Barbara Roden as Beryl Stapleton
Gianluca Salvatori as The Dacre Hotel
Donald J. Terras as The Politician, the Lighthouse, and the Trained Cormorant*
* received Investiture at another event during the year
What is an Investiture?

The Woman:
Debbie (Mrs. Ralph) Hall
What is The Woman honour?

"Stand with me here upon the terrace..."
(as named at this Dinner, not their year of passing)
Richard Lancelyn Green (The Three Gables, 1985)
Others were not named in the 2005 BSJ report of the Dinner.
What is the origin of “standing on the terrace?”

List of 2005 BSI Dinner Attendees (not available at this time)

A recording of portions of the 2005 BSI Dinner is available at Harvard as part of the BSI Archive.