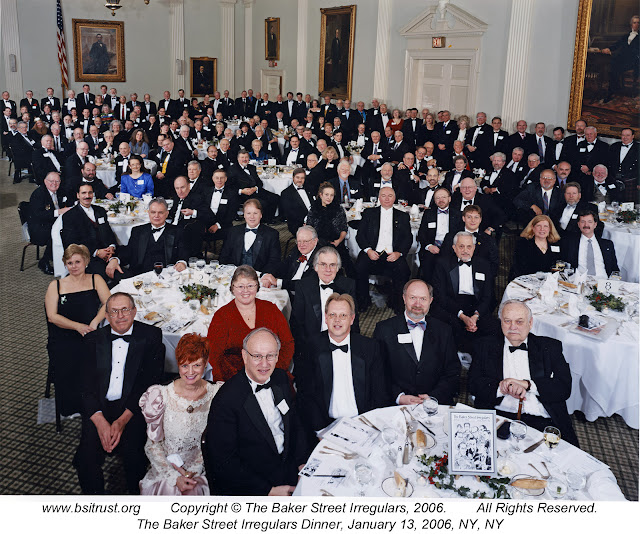 The Baker Street Irregulars and invited guests assembled Friday evening at the Union League Club to celebrate the 152nd birthday of Sherlock Holmes.  Peter Blau, in his report on the weekend in his Scuttlebutt from the Spermaceti Press, noted that attendees at this year’s birthday festivities were greeted with “clear skies and pleasant temperatures.”  After Wiggins (Michael Whelan) opened the proceedings, Bob Coghill read the BSI Constitution and Buy-Laws.  Barbara Roden offered a witty canonical toast to Mrs. Hudson.  Other toasts followed, including ones to Mycroft by Joe Coppola, to Watson's second wife by Francine Kitts, and to Sherlock Holmes by Lou Lewis.   Ken Lanza led the throng in the reading of the Musgrave Ritual.

David Musto led off the program with commentary on the many incidents of atavism in the Canon. Terry Belanger gave his perspective on collecting rare books.  Lloyd Rose analyzed the spate of detectives portrayed on current popular television programs.  For the evening's musical entertainment, pianist Tyke and vocalist Teddie Niver treated Irregulars and guests to song and dance in the style of music hall circa 1900.

Attendees were treated to a fascinating “Tribute to an Era of Old Irregulars” by Art Levine, who gave an engaging account of the Edgar W. Smith era, rich with detail, from his unique perspective of having been invested fifty years ago.

Norma Hyder was toasted as The Woman. Seven Irregulars received their Shilling at the Dinner.

Roy Pilot concluded the evening’s program with a reading of Vincent Starrett's sonnet "221B."

At the next day’s Sherlockian Cocktail Reception at 24 Fifth Avenue, Judge Albert Rosenblatt and his daughter, Betsy Rosenblatt, once again, performed their remarkable summation of the previous year and of the Festivities in verse.

Investitures:
Curtis Armstrong as An Actor and a Rare One
Paul G. Churchill as Corot
Jerry Kegley as Nathan Garrideb
Richard M. Olken as Bob Carruthers
Jennie C. Paton as Laura Lyons
Trevor S. Raymond as Horace Harker
Regina Stinson as A Little Ribston Pippin
* received Investiture at another event during the year
What is an Investiture?

The Woman:
Norma (Mrs. William) Hyder
What is The Woman honour?

"Stand with me here upon the terrace..."
(as named at this Dinner, not their year of passing)
Not named in the 2006 BSJ report of the Dinner.
What is the origin of “standing on the terrace?”

List of 2006 BSI Dinner Attendees (not available at this time) 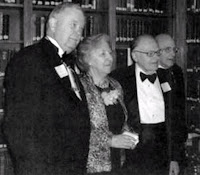 Immediately prior to the BSI Dinner, a reception is held for BSI members and guests, at which the attendees honor that year’s The Woman.   In 2006, the honoree was Norma Hyder, wife of the dean of the Baltimore Sherlockian community, William Hyder, and a constant supporter of Sherlockian activities in Baltimore.  James Saunders presented Norma with a corsage, as he has to The Woman for the past 31 years.  Following the ceremony, The Woman is escorted to a gala dinner at which prior honorees are in attendance, and The Woman from the previous year serves as hostess.  You can hear this ceremony in this 5 minute vignette from the 2006 BSI festivities.

A recording of portions of the 2006 BSI Dinner is available at Harvard as part of the BSI Archive.