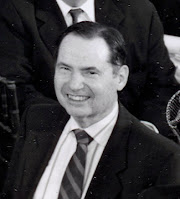 Art was born in Cleveland, Ohio on November 23, 1929. He received his BA from Case Western Reserve and his Ph.D. in political science from Columbia University. He worked for the National Advisory Committee for Aeronautics in Cleveland, the agency that in 1958 became NASA. One of his tasks was recruiting astronauts, and he hired Neil Armstrong and John Glenn. In 1961, he and his family relocated to New York, where he became the first administrative head of the NASA Goddard Institute for Space Studies. He recruited the physicists whose job it was to get man to the moon. After his successful career in NASA, he left to become a full professor of Public Administration at Baruch College of the City University of New York. Having attended his first BSI Dinner in the early 1950s, he was, for many years, the BSI member with the longest institutional memory.  Art passed away in 2015.

In this interview, Art recounted the past under Michael Whelan’s expert questioning, sharing wonderful memories about Edgar Smith, Rex Stout, and many others.

The 1955 BSI Dinner
Arthur Levine  received his Investiture at this BSI Dinner.
Levine, Arthur L., “A Man of ‘Formidable Resourcefulness’ - An Essay in the Manner of a Footnote to History,” Baker Street Journal v4 n3 (July 1954) 169-173 (available in the eBSJ).