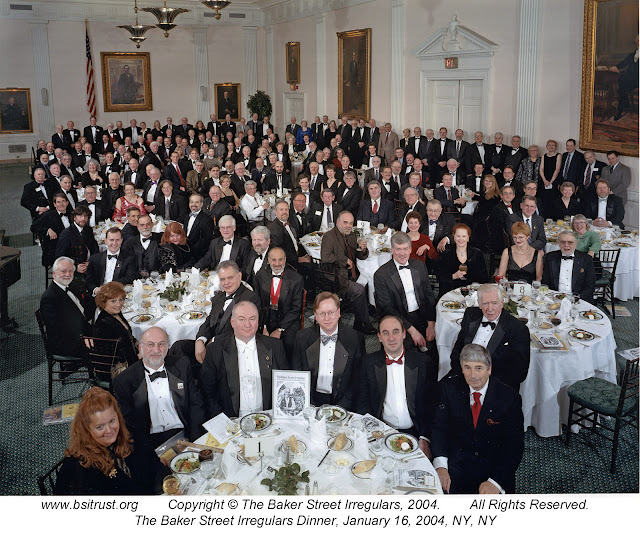 At Sherlock Holmes’s birthday sesquicentennial, “all was cocktails and conviviality as the Irregulars and their guests made merry.”  Wiggins announced the creation of The Baker Street Irregulars Archives at the Houghton Library at Harvard University and of its governing body, The BSI Trust.

Post-prandial speeches included Michael Dirda’s observation that, owing to the relatively few facts in circulation outside the Canon about Holmes’s life, some folks go so far as to question his existence. Dirda took solace from the evening's gathering. "The presence of those here tonight is proof of Sherlock Holmes's existence.”  Paul Singleton and Sarah Montague Joffe portrayed Sherlock's long-suffering parents, with Andrew Joffe as their perplexed physician (Dr. Sacker), offering a glimpse into the unusual family life with baby Sherlock.  Also featured were Thierry Saint-Joanis as a gift-giving Grandmère Vernet, and John Baesch, who proved that Mycroft could be a jealous big brother.

Martha McCormack was toasted as The Woman. Seven Irregulars received their Shilling.  Paul D. Herbert was honored with The Two-Shilling Award.  Peter Blau was gifted a most amazing relic: Dr. Watson's campaign writing desk! Restored from hard usage in Afghanistan, it bears a new plaque which reads, in part: "With Grateful Appreciation of The Many Contributions As Society Secretary, Sherlockian Ambassador, And Record Keeper Extraordinaire."

At the next day’s Sherlockian Cocktail Reception at the National Arts Club, Judge Albert Rosenblatt and his daughter, Betsy Rosenblatt, once again performed their remarkable summation in verse of the previous year and of the Festivities.

Investitures:
Gideon D. Hill as Jack Prendergast
Francine Kitts as Lady Hilda Trelawney Hope
Nicholas Meyer as A Fine Morocco Case
Bernard Oudin as Our French Gold
Michael Ross as Von Bork
Constantine Rossakis as St. Bartholomew's Hospital
Doug Wrigglesworth as The Retired Colourman
* received Investiture at another event during the year
What is an Investiture?

The Woman:
Martha (Mrs. George) McCormack
What is The Woman honour?

"Stand with me here upon the terrace..."
(as named at this Dinner, not their year of passing)
Not named in the 2004 BSJ report of the Dinner.
What is the origin of “standing on the terrace?”

List of 2004 BSI Dinner Attendees (not available at this time)

The BSI Archive does not have a recording of the 2004 BSI Dinner at this time.  If you have one or know where one exists, please contact the Chair of the Trust.