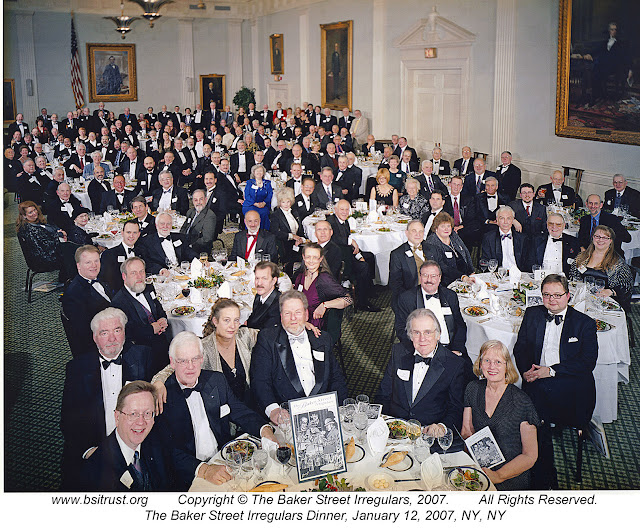 The dinner celebrating Sherlock Holmes's 153rd  birthday saw an impressive array of presentations in various formats, affirming for all the guests that Sherlockians are talented in many arenas. Three of the traditional toasts were offered in verse. Dan Posnansky spoke about Holmes’s reference to “a quartering of the Union Jack with the Stars and Stripes” in “The Noble Bachelor.”  He also brought a number of treasures, including a copy of Beeton’s Christmas Annual, for audience delectation.

A bevy of deserving contenders competed in a game called Pericolo in which they had to identify Canonical quotations. “The Veiled Lodgers,” comprised of David Stuart Davies, Susan Diamond, and Al Gregory faced off against "The Cardboard Boxers,” featuring Scott Monty, Susan Rice, and Robert S. Katz. Worthy competitors, all! The Boxers emerged triumphant in the hard-fought game, which was judiciously adjudged by Les Klinger, Judge Andrew Peck, and Judge Albert Rosenblatt.

This dinner also marked Michael Whelan’s 10th year as Wiggins. His opening remarks included an exhortation to Irregulars “to always remember the philosophy of Christopher Morley when playing the Game.” He acknowledged the contributions of Bob Thomalen to the leadership of the BSI. He also recalled his vision for the BSI as presented at the first dinner he oversaw, the 1998 BSI Dinner. He emphasized the BSI’s core identity as a literary society. The evening’s chronicler notes: “The publishing accomplishments of the past decade speak to that orientation.” Honored guest Laurie R. King provided a copy of her latest novel The Art of Detection for each attendee.

Wiggins introduced a new award, the Editor’s Medal (or “Eddies”), which was presented to Peter Blau, Steve Doyle, Mitch Higurashi, and Bill Hyder in recognition of their roles as editors for books published by the BSI in the Manuscript and International Series. Continuing the recognition of efforts, Al Rosenblatt received a walking stick in honor of his service to the BSI.

Seven deserving Irregulars received their Shilling this evening. The following week, at the Sherlock Holmes Society of London dinner, Jonathan McCafferty was also invested in the BSI.

Candace Lewis was toasted as The Woman.

Paxton Whitehead concluded the evening’s program with a reading of Vincent Starrett's sonnet "221B."

The Woman:
Candace (Mrs. Lou) Lewis
What is The Woman honour?

"Stand with me here upon the terrace..."
(as named at this Dinner, not their year of passing)
Robert Douty (The Priory School, 1980)
Ronald Mansbridge (A Case of Identity, 1998)
Robert Schultz (The Gloria Scott, 2002)
Maureen Green Van der Flaes (Kitty Winter, 1992)
Alan Foster (A Commission from the Sultan of Turkey, 1965)
What is the origin of “standing on the terrace?”

List of 2007 BSI Dinner Attendees (not available at this time)

A recording of portions of the 2007 BSI Dinner is available at Harvard as part of the BSI Archive.