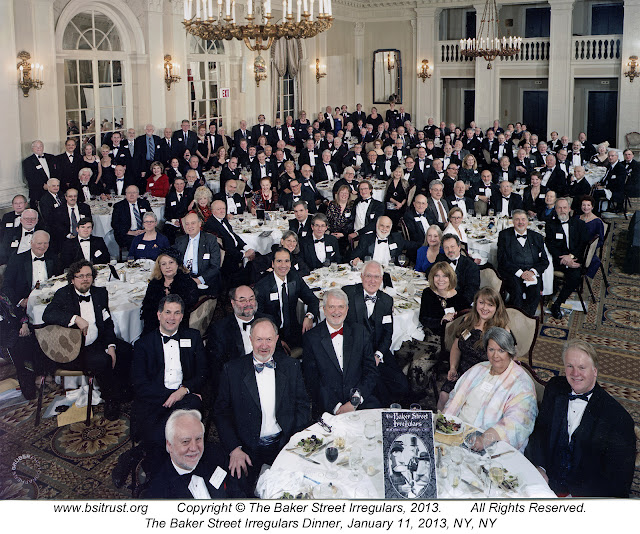 Sherlock Holmes’s 159th birthday was marked with erudite presentations, heartfelt toasts, and, above all, the enduring Sherlockian camaraderie that underpins and infuses every gathering in celebration of the Master.  The theme of the evening was celebrating past BSI leaders.

Given the theme of the evening, (almost) all of the presentations were about former heads of the BSI. Steven Rothman spoke on the life of Christopher Morley.  Gregory Darak spoke on Edgar W. Smith.  Peter Blau reminisced about Julian Wolff.  Susan Rice and Evelyn Herzog talked about Tom Stix, Jr.  Russell Merritt then spoke on the many faces of Moriarty in early films.  Julie McKuras spoke of an old Irregular, former University of Minnesota Librarian and Two-Shilling Award holder, Errett Weir McDiarmid, Jr.  Henry Boote and Lyndsay Faye presented a musical tribute to characters from “The Copper Beeches” and “A Scandal in Bohemia.”  Francine Kitts, once again, performed a moving “Standing upon the Terrace” ceremony, remembering those whom we have lost.

Eight deserving Irregulars received their Shilling.  Wiggins presented the Two-Shilling Award to Michael Kean for extraordinary devotion to the cause beyond the call of duty.  He presented an Eddy Award to John Bergquist (Associate Publisher of BSI Press), Robert Katz, Sonia Fetherston, and Andrew Solberg. James Saunders was recognized for 50 consecutive years of presenting The Woman of the year with a corsage.

Elaine Coppola was toasted as The Woman.

Key to People in the 2013 BSI Dinner photo (not available at this time, but see the 2013 Table Seat Assignments (PDF)

Investitures:
Jan Burke as The Most Winning Woman
Philip Cunningham as Abe Slaney
Stefano Guerra as Count Negretto Sylvius
Thomas A. Horrocks as Colonel Sebastian Moran
Mark Levy as Don Juan Murillo
Rosane McNamara as Lady Mary Brackenstall
Daniel Moss as Culverton Smith
Franklin B. Saksena as Jonathan Small
* received Investiture at another event during the year
What is an Investiture?

The Woman:
Elaine (Mrs. Joseph A.) Coppola.
What is The Woman honour?

"Stand with me here upon the terrace..."
(as named at this Dinner, not their year of passing)
Pamela Bruxner (The British Government, 1998)
Alfred A. Levin (Abe Slaney, 1993)
Richard H. Miller (The Grice Patersons in the Island of Uffa, 1982)
Dr. Robert E. Robinson (The Hansom Cab, 1986)
What is the origin of “standing on the terrace?”

A recording of portions of the 2013 BSI Dinner is available at Harvard as part of the BSI Archive.