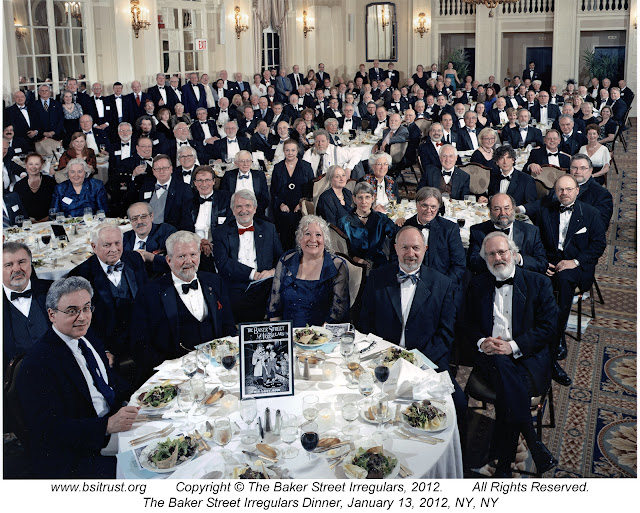 The dinner celebrating Sherlock Holmes’s 158th birthday was another evening of recognition, celebration, and scholarship.  The dinner's theme was "His Last Bow" in celebration of the centenary of the beginning of Holmes's involvement in the case.  Wiggins (Michael Whelan) began the evening by lauding the large number of presentations that the BSI has published over the previous decade.

As the dinner's theme was "His Last Bow," Burt Wolder, Robert Katz, and Barbara Rusch all gave related presentations.  Paul Singleton and Scott Monty gave a Sherlockian rendition of the Carl Reiner and Mel Brooks “2,000 Year Old Man” (who sounded very much like Peter Blau).  Otto Penzler spoke of tales of book selling and sellers, including the old Irregular Lew David Feldman.  Henry Boote led us in singing the BSI’s anthem, “Aunt Clara.”  Francine Kitts, once again, performed a moving “Standing upon the Terrace” ceremony, remembering those whom we have lost.

Eight deserving Irregulars received their Shilling.  The BSI Trust presented its Benefactor’s Award to Glen Miranker in recognition of his outstanding generosity to the BSI’s archives.  Wiggins presented The Two-Shilling Award to Henry Boote for extraordinary devotion to the cause beyond the call of duty.  He presented an Eddy Award to Mary Ann Bradley for editing the 2011 Baker Street Journal Christmas Annual.

Constance Kean was toasted as The Woman.

Marsha Pollak concluded the evening’s program with her recitation of Bill Schweickert’s “A Long Evening with Holmes.”

At the next day’s Sherlockian Cocktail Reception at the New York City Bar Association, Judge Albert Rosenblatt and his daughter, Betsy Rosenblatt, once again performed their remarkable rhyming summation of the previous year and of the Festivities.  In addition, Henry Boote and James Saunders gave an adapted version of “Mr. Gallagher and Mr. Sheen.”

Key to People in the 2012 BSI Dinner photo (not available at this time, but see the 2012 Table Seat Assignments (PDF)

The Woman:
Constance (Mrs. Michael H.) Kean.
What is The Woman honour?

"Stand with me here upon the terrace..."
(as named at this Dinner, not their year of passing)
James H. Bready (The Disappearance of James Phillimore, 1955)
Dr. Bryce L. Crawford, Jr. (The Solitary Cyclist, 1985)
Dr. George L. John (“Sir Jasper Meek, 1969)
Jason Pierre Rouby (Vanderbilt and the Yeggman, 1968)
J. Warren Scheideman (Count Von und Zu Grafenstein, 1982)
Peter Harry Wood (The Second Stain, 1985)
What is the origin of “standing on the terrace?”

A recording of portions of the 2012 BSI Dinner is available at Harvard as part of the BSI Archive.