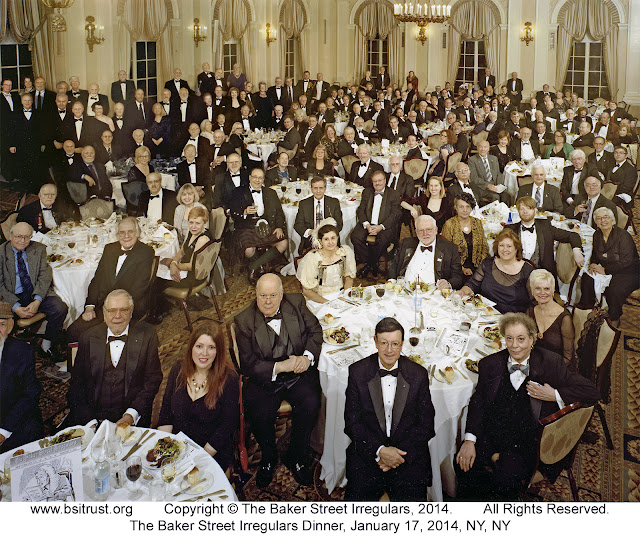 Sherlock Holmes’s 160th birthday also marked the 80th birthday of the BSI.  It was celebrated with tri-colored cupcakes that matched Holmes’s dressing gown (blue, purple, and mouse) and after-dinner brandy.

Jan Burke spoke on the forensic nature of Holmes’s work.  Judge Albert Rosenblatt led a debate among Andrew Fusco, Leslie Klinger, Lou Lewis, John Linsenmeyer, Andrew Peck, and Betsy Rosenblatt on whether to amend the BSI’s Constitution and Buy-Laws.  Sonia Fetherston spoke of an Old Irregular, Bliss Austin. Henry Boote led the musical presentation. Francine Kitts, once again, performed a moving “Standing upon the Terrace” ceremony, remembering those whom we have lost.

Seven deserving Irregulars received their Shilling.  Marilyn Nathan was toasted as The Woman. Randall Stock received the Two-Shilling Award for extraordinary devotion to the cause beyond the call of duty. Les Klinger was awarded the Edgar W. Smith Intrepid Irregular Award for his role on behalf of the public domain status of Sherlock Holmes qua literary character and all other canonical characters and events that currently exist in the public domain in the United States.

The evening concluded with Evelyn Herzog reciting Vincent Starrett’s “221B.”

At the next day’s Sherlockian Cocktail Reception at the New York City Bar Association, Judge Albert Rosenblatt and his daughter, Betsy Rosenblatt, once again performed their remarkable rhyming summation of the previous year and of the Festivities.  Paul Singleton, Nick Martorelli, and Mary Ellen Rich performed a Sherlock Holmes radio play.

Key to People in the 2014 BSI Dinner photo (not available at this time, but see the 2014 Table Seat Assignments (PDF)

Investitures:
Mark Alberstat as Halifax
Sonia Fetherston as The Solitary Cyclist
Harrison Hunt as The Something Hunt
Peter McIntyre as Arthur Cadogan West
Jacquelynn Morris as The Lion's Mane
Christopher Music as Wagner Night at Covent Garden
SJ Rozan as The Imperial Palace of Peking
* received Investiture at another event during the year
What is an Investiture?

The Woman:
Marilyn (Mrs. Hartley) Nathan.
What is The Woman honour?

A recording of portions of the 2014 BSI Dinner is available at Harvard as part of the BSI Archive.