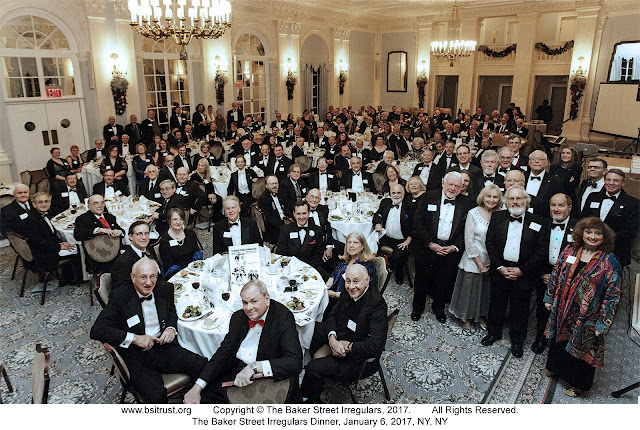 The fact that the 163rd Birthday Dinner actually took place on January 6, the Master’s birthday, could not but enhance the atmosphere throughout the gala weekend.

The pre-dinner cocktails in the Roof Dining Room of the Yale Club showcased the announcement of Nicole Boote’s honor as The Woman.

After Michael Whelan (BSI’s Wiggins) opened the dinner, Steven Rothman's discussed "Why January 6th?" The toasts opened in fitting style with Robert Stek “o-punning” on the charms of Mrs. Hudson--in his own inimitable way, abetted, if not debated, by Robert Katz.  Clifford Goldfarb had us raise our glasses to Mycroft. Sherry Rose-Bond led the toast to Watson’s Second Wife.  Andrew Fusco toasted Sherlock Holmes.  John Linsenmeyer paid homage “To an Old Irregular,” Edward F. Clark, Jr.  Michael Kean and John Bergquist presented the Editors’ Medals for BSI Publications, the “Eddies,” to the editors of the three BSI volumes that had been completed during 2016 and which would be on sale the next morning in the vendors’ room.

Bill Dorn presented a montage comparing the same Sherlockian scenes in various films.  Andrew Joffe, Sarah Montague, and Paul Singleton staged a comparison of Canonical text and the first drafts of a female Watson.  Tim Greer applied Holmes’ own investigative methods to the Canon to discern that the true author was…William Shakespeare. Mark Alberstat read the Musgrave Ritual. Thomas Horrocks read the Constitution and Buy Laws.  Henry Boote sang about Sherlock’s Birthday to the tune of “What a Wonderful World,” offering an uncanny Louis Armstrong impression.

Francine Kitts delivered another customarily wonderful and touching tribute to departed Irregulars in the “Standing upon the Terrace” ceremony; for the first time ever, these memorials were accompanied by photographs. This truly underscored the enduring links among generations of Sherlockians, all present in different senses of that word.

Seven Irregulars received a Shilling. Ben Vizoskie received The Two-Shilling Award—55 years after it was first awarded to Rex Stout. Steven Rothman was honored with an engraved crystal Milestone Award as the longest-serving Baker Street Journal editor who, at the time of the Dinner, had just presided over his 300th (!) BSJ issue. Wiggins presented Andrew Fusco, Michael Dirda, Susan Vizoskie, and Philip Bergem each with a “Tip of the Deerstalker” award in recognition for their contributions to the BSI.  In keeping with the evening’s theme of recognizing extensive service, Wiggins himself was surprised with a gift of a Golden Sovereign from the BSI, in recognition of his two decades of leadership. (Similarly, a Golden Sovereign was presented to Julian Wolff, then head of the BSI, at the 1973 BSI Dinner.)

The evening concluded with a recording of Vincent Starrett reciting his poem “221B.”

At the next day’s Sherlockian Cocktail Reception at the Yale Club, Judge Albert Rosenblatt and his daughter, Betsy Rosenblatt, once again performed their masterful and anticipated-year-round poetic rhymed synopsis of the previous year and of the Birthday Weekend.

Click on the above photo to see a larger version of it and maximize your browser window to see the most detail.

Key to People in the 2017 BSI Dinner photo (not available at this time, but see the 2017 Table Seat Assignments.

Investitures:
Charles Blanksteen as Cavendish Square
Ross Davies as The Temple
Bonnie MacBird as Art in the Blood
Charles Prepolec as The Man with the Twisted Lip
Michael J. Quigley as A Large Brass Bound Safe
Tamar Zeffren as The London Library
Christopher Zordan as Bunsen Burner
* received Investiture at another event during the year
What is an Investiture?

The Woman:
Nicole (Mrs. Henry) Boote.
What is The Woman honour?

A recording of portions of the 2017 BSI Dinner will be available in the BSI Archive.