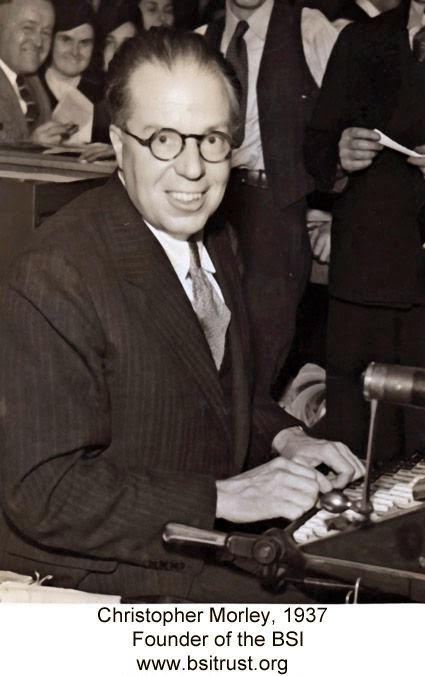 The December 1934 BSI Dinner is called the “First BSI Annual Dinner.”  However, it was preceded by two earlier BSI events that year.

Founded on January 6, 1934, the BSI held its “first meeting” (cocktail reception) at the Duane Hotel to celebrate Sherlock Holmes’ birthday.  It was attended by 15-20 men and women, mostly members of Christopher Morley’s earlier clubs.  There was also a “First Formal Meeting” of the BSI on June 5, 1934, held at Christ Cella’s Restaurant. This one was “stag,” and only eight men attended.  At this, Morley read his manuscript of “Was Sherlock Holmes an American?”

Despite these earlier events, the December 7, 1934 BSI Dinner has always been considered (even by the founding fathers) to be the First Annual Dinner. Eighteen to twenty people attended, including archaeologist Harold W. Bell, actor William Gillette (who authored the play “Sherlock Holmes” and played the lead role for many years), writer Vincent Starrett, illustrator Frederick Dorr Steele (who drew the original Sherlock Holmes stories in Collier’s Magazine, boxer Gene Tunney, and critic and commentator Alexander Woollcott.

The photo of Christopher Morley on this page is courtesy of Steven Rothman.

"Stand with me here upon the terrace..."
(as named at this Dinner, not their year of passing)
None this year.
What is the origin of "standing on the terrace?"

See also our Brief History of the BSI for more about the beginnings of the BSI.

1934 BSI Dinner Menu (digitized images at Harvard)
Cover, interior, and back.  Sequence 1-3, plus a second copy.


For an index to all BSI Dinners and photos, see our BSI Dinner Summary list.