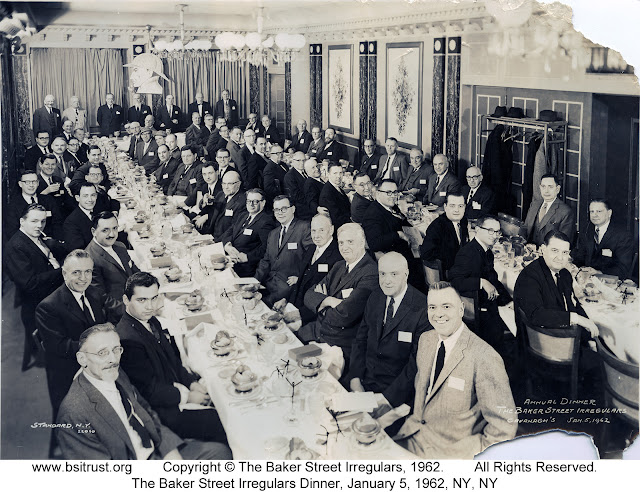 Sixty eight BSI and guests attended the festivities commemorating Sherlock Holmes’s 108th Birthday. The cocktail hour was enlivened by Will Oursler’s toast to The Woman, Mrs. Charles Honce. In adherence to Irregular tradition, the Constitution and Buy-Laws were read aloud; Frank Waters did the honors. Additional canonical toasts to Mrs. Hudson, Mycroft, and Dr. Watson’s Second Wife (the last delivered by the master of ceremonies, Rex Stout) were proffered, along with The Musgrave Ritual, Sherlock Holmes’s Prayer, and further tributes to Jim Montgomery, Christopher Morley, and Edgar W. Smith. Eight new Irregulars received their Investitures, including Dr. Charles Lauterbach, who received it posthumously instead of in absentia as originally planned.  An extraordinary Irregular award, the Two-Shilling Award, was presented to Rex Stout for services beyond the call of duty. Announcement of the Morley-Montgomery Memorial Award (a cheque of $100 from Lew D. Feldman) went to Robert Keith Leavitt whose article, "The Origin of 221B Worship," was selected by the Judges as the best in The Baker Street Journal during 1961. After this, messages from absent members and from Scion Societies in this country, Denmark and Holland were read.

A tape recording of Jim Montgomery's ''Aunt Clara" was heard, followed by the papers of the evening:
"Not an Unmatched Performance," by Thomas Stix, Jr.; "New Light on the Agra Treasure," by Philip Kasson; and "Who's Afraid of the Big Bad Moriarty," by Tom Stix, Sr. Lord Donegall spoke and was followed by Richard Smith’s report on The Baker Street Irregulars, Inc. He was followed by the reports from the Scion Societies.   The meeting concluded with the toast to Sherlock Holmes, given by Basil Davenport.

Investitures:
Robert Q. Carver as The Case of Mme. Montpensier
Irwin F. Deutsch as The Intricate Matter from Marseilles
Joseph Gillies as The Aluminium Crutch
Thomas F. Grady as Mr. Hilton Soames, of the College of St. Luke's
John C. Hogan as The Binomial Theorem*
Walter Klinefelter as The British Barque Sophy Anderson*
Charles E. Lauterbach as Thorneycroft Huxtable, M.A., Ph.D., etc.
Duncan MacDougald, Jr. as Brunton, the Butler, of Hurlstone
Tom Mahoney as The Case of John Vincent Harden
Robert J. Mangler as Sir Hugo Baskerville
Kohki Naganuma as The Curious Incident of Sherlock Holmes in Japan*
Robert G. Parker as A Garrotter by Trade*
* received Investiture at another event during the year
What is an Investiture?

The Woman:
Emanuella (Mrs. Charles E.) Honce
What is The Woman honour?

"Stand with me here upon the terrace..."
(as named at this Dinner, not their year of passing)
Dr. Charles Lauterbach
What is the origin of “standing on the terrace?”

Key to People in the 1962 BSI Dinner photo (PDF)
This revised Key replaces the Key noted below from the 1962 Sherlockian Who’s Who and What’s What.

1962 Sherlockian Who’s Who and What’s What, Includes an outdated key to the 1962 BSI Dinner (digitized image at Harvard)
Three pages. Sequence 10-12