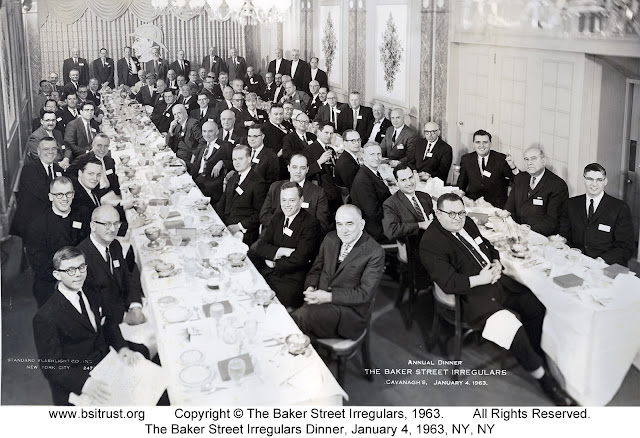 Seventy two guests attended the festivities commemorating Sherlock Holmes’s 109th Birthday, under Rex Stout’s direction. Irregular tradition carried the evening: the Constitution and Buy-Laws were read aloud; the four Canonical toasts and the four Irregular toasts (to Edgar W. Smith, Christopher Morley, James Montgomery and Sherlock Holmes) were proffered; and Sherlock Holmes’s prayer, the Musgrave Ritual, Readings from the Writings, and the Challenge in the Canon were all satisfactorily delivered. Five new members were invested.

The absence due to illness of the Marquis of Donegall, of the Sherlock Holmes Society of London, was regretfully noted. S. Tupper Bigelow saw his proverbial cup runneth over when, in addition to securing the Morley-Montgomery Award for best article published in the Baker Street Journal the previous year, he won a token from the Journal’s editor for the “physical excellence of his manuscripts.” William Baring-Gould, “author of one of the most remarkable books ever penned,” was given the Irregular Two-Shilling Award. The evening closed with reports from Scion societies, the expected intellectual disputation, and the news that a testimonial dinner to Vincent Starrett is scheduled to take place that March in Chicago.

Investitures:
Edward F. Clark Jr. as The Matter of the French Government
Stillman Drake as Porlock*
Ralph E. Edwards as Dr. Barnicot
Robert W. Hahn as Colonel Ross*
Banesh Hoffmann as The Dynamics of an Asteroid
James Edward Holroyd as The St. Pancras Case*
William D. Jenkins as Sahara King
Philip Kasson as The Dundas Separation Case
Charles O. Merriman as Colonel Hayter*
* received Investiture at another event during the year
What is an Investiture?

The Woman:
Marjorie (Mrs. William S.) Hall.
What is The Woman honour?

"Stand with me here upon the terrace..."
(as named at this Dinner, not their year of passing)
None listed in the 1963 BSJ report.
What is the origin of “standing on the terrace?”

1963 BSI Dinner Menu (digitized image at Harvard)
Interior and cover and  back. Sequence 13-14.